February 03, 2020 | 08:55 (0) user say
Tweet Email Print
Vietjet continues to see positive growth in its core business of air transportation in 2019, maintaining its leading position in Vietnam’s domestic market and the fast growth of its international flight network. In 2019, the airline’s network increased by 24 per cent, with 22 international routes connecting Vietnam with Japan, Hong Kong SAR, Indonesia, and especially India – a market of 1.2 billion people. Vietjet also transported nearly 25 million passengers in 2019, an increase of 28 per cent compared to 2018.

Full-year 2019 revenue and profit from air transportation stand at VND41.097 trillion ($1.79 billion) and VND3.936 trillion ($171.13 million), increasing by 21.4 and 29.3 per cent, respectively, compared to 2018. Vietjet’s revenue from sales and leaseback activities has been adjusted due to the airline’s revising its aircraft delivery from Airbus in 2019.

To compensate for the delay in new aircraft delivery from Airbus, Vietjet carried out a lease of nine aircraft, increasing its operating fleet to 78 aircraft with 321,000 aircraft operation hours and 139,000 flights. Its load factor stays at 87 per cent, with technical reliability rate being at 99.64 per cent, which are among the top airlines in the Asia-Pacific region. Vietjet has also been awarded the highest ranking for safety with seven stars from AirlineRatings.com.

Following the sustainability-focused model of low-cost carrier (LCC), ancillary revenue has become an important factor determining the success of Vietjet because of its profit margin exceeding 90 per cent. According to the CarTrawler Yearbook 2019, Vietjet ranked 12th worldwide in terms of its ratio for ancillary revenue on top of total air transport revenue.

Vietjet’s new and modern fleet also became younger with the average age of 2.75 years, with great fuel-efficiency. Especially, in September 2019, the airline received an A321neo ACF (Airbus Cabin Flex) aircraft with 240 seats, the first of its kind in the world. The new aircraft features fuel consumption savings by a minimum of 16 per cent; noise reduction up to 75 per cent; and emission reduction up to 50 per cent.

In 2020, the airline plans to take delivery of nine more new A321neo aircraft and 20 more every year from 2021, which is expected to reduce fleet operation costs and increase the profit from air transportation and aircraft financing activities. Additionally, Vietjet continues to optimise its operation and management costs in order to enhance its air transportation business performance. 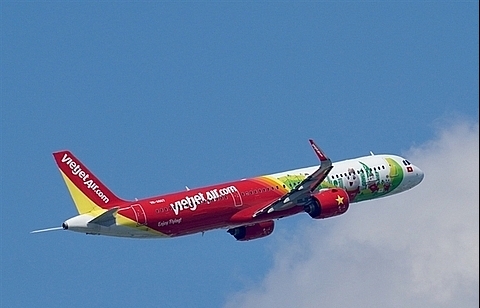