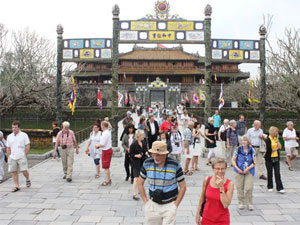 Thanh told a two-day conference on investment in the central coastal region yesterday that there was great potential for socio-economic development but achievements so far were below expectations.

Thanh said the region needs to work out measures to tackle problems related to infrastructure, incentive policies and mechanisms, and human resources.

Ministry of Planning and Investment Development Strategy Institute director Bui Tat Thang said the most prominent advantage of the region is sea tourism.

The region also has abundant natural resources such as titan, iron, aluminum and oil, especially oil with its spearhead projects of Dung Quat and Vung Ro.

To date, six economic zones and 34 industrial zones had been established and connected to the seaport and domestic and international airports.

Statistics showed investments in the region during 2007-12 hit VND605 trillion($28.8 billion) with an average year-on-year growing rate of 11 per cent.

As of 2012, the region attracted 709 foreign direct investment projects with a total registered capital of $25.25 billion, making up 12.14 per cent of the country's registered FDI.

The average gross domestic product growth rate per capita was 12.5 per cent in 2006-11, nearly doubling the country's average.

Deputy Minister of Planning and Investment Dang Huy Dong told the conference that enhancing the regional link is the optimal solution to turn the region into a single economic space to exploit the competitive advantages of each locality.

He urged the provinces to focus on completing infrastructure in economic and industrial zones, providing support to investors by speeding up land clearances, and attracting investment corresponding to regional competitiveness.

Head of the Consultative Group for Development of the Central Region Tran Du Lich said connectivity between the deep-water port, airport and economic and industrial zones also needs to be enhanced to reduce transport costs.

He said mechanisms and policies should focus on investments in key industries.

At the two-day conference, investors' commitment in the region reached a total value of over $30.8 billion. Nine projects in regional provinces and cities received investment licences worth a combined value of nearly $197 million. The Bank for Investment and Development of Vietnam also signed credit contracts with enterprises totalling about $221 million.