December 18, 2012 | 16:55
Tweet Email Print
A challenging economy has pushed Vietnam’s electronic industry to its first market decline since 2008. How will the market perform in 2013 and what should electronic retailers and producers do to deal with the situation? 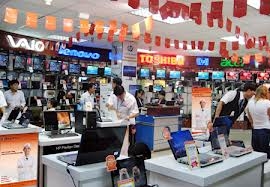 Pessimistic forecasts prevailed for the electronic and IT products industry market this year at a conference help by Nhip cau Dau tu newspaper. The title of the conference theme:  “Cooperate together in stimulating consumer demand by the end of 2012.”

“It is the first time the industry has experienced its negative growth rate for five years and there will no recovery sign by the second half of 2013,” said Huynh Phuoc Cuong, GFK Vietnam’s electronic and IT products division manager.

According to the results of the latest survey conducted by GFK Vietnam - GFK Market Insight October 2012, the average of sale units in the consumer electronics market dropped by 8.8 per cent while the average of value declined by 4.9 per cent year on year.

Only several home appliances including air conditioner and washing machines enjoyed positive growth rates whereas other electronic and IT products such as CRT TV, Plasma TV, camcorder, digital cameras, mobile computers and even smart-phones endured declines of sales, revenues and prices quarter on quarter.

Cuong thought that the downturn was mainly caused by the impact of the global economic crisis since 2008.

“The market is booming in 2008-2009 with a series of previous orders from foreign countries. However, after the global economic crisis, an amount of orders were canceled in 2009-2010. And this year we cannot export as well as previous years. Hence, total sale units and revenues sharply dropped,” said Cuong.

Steven H.L.Goh, chairman of Retail Asia Publishing, agreed with Cuong that impacts of the global crisis slowly came to Vietnam and this year the country was totally affected.

“At the time the burst of the 2008 global crisis, foreign investors came to other emerging markets like Vietnam and caused the bubbles in the stock and property markets of the nation. The recent deflation of the bubbles led the present dull of the nation’s economy and also hit the consumers’ confidence. As a result, the retail market, in which is the electronic market, is slowing down,” said Goh.

Goh believed that the market would recover if foreign investors come back. “We might see in 2014 but not 2013,” added Goh.

Nguyen Nu Tuyet Hong, director of client service quantitative of Nielsen Vietnam, also said that Vietnam’s consumer confidence index dipped 8 points to 87 in this third quarter, marking the lowest confidence since the first quarter of 2009. Around 73 per cent of Vietnamese stated this was not a good time to buy things they wanted and needed, and their cautious sentiments were predicted to increase more next year.

Nguyen Huy Vu, a representative from Nguyen Kim, one of the largest electronics and home appliance retailers in Vietnam said: “We thoroughly understand the challenges. However, it is not a time for waiting a miracle that the market would be recovered by itself. We call for cooperation of partners in stimulating customer demand to save the market and save all of us, too.” Vu said that Nguyen Kim would like to offer best prices and services to lure customers but it faced difficulties as it did not manufacture products.

“We sell washing machines but we cannot offer washing powders for them. We sell TV but we cannot decide the length of warranty. We sell mobile phones but we cannot discount their mobile fees. We lack a lot of thing,” Vu said. “That is the reason why we call for the cooperation of producers, service suppliers, and consultants to create a comprehensive sale policy that attract customers and benefit us.”

Hong from Nielsen Vietnam said that trying to offer low prices was good but it was not enough to lure customers.

“With the hard period of the economy, customers did their tightening monetary policies. Many of them tend to buy products with low prices but there is the same number of customers willing to pay at high prices so as to own premium products which are innovative, modern, have more value added initiatives and have good after-sale services,” said Hong.

“The evidence is that new generations of smart-phones, LED TVs, tablets and Ultrabook series with touch screen are hunted by customers and promises a healthy growth,” added Hong.
Representatives from Sony Vietnam, Samsung Vietnam and Intel Vietnam also agreed that customers currently are not easily satisfied with the normal products. They always request higher technology added in their goods and willing to order overseas to own new products of famous brands.

Mai Sean Cang, general director of Intel Vietnam, said that in the fierce competition among technology producers, it only tried its best to continuously launch new products with better quality, design and prices and ensure a good delivery to customers.

Hong emphasised that in the current climate, consumers and shoppers were more careful in their stores, brands and format choices with new lenses. Hence, retailers and producers should show them what their competitive features are and choose right advertisements.

“About 92 per cent of Vietnamese consumers are more likely to trust recommendations from people they know and 63 per cent are more likely to trust consumer opinions posted online. So caring about word-of-mouth – a pre-store source of information is really important,” said Hong.
“Besides, reputation of retailers, product quality, a wide range of products and counseling skills of sales persons are key drivers to select a store chain,” added Hong.