May 23, 2020 | 10:01
Tweet Email Print
The High-level People’s Court in Ho Chi Minh City on May 22 rejected all appeals filed by four defendants who are former city officials accused of “violating regulations on management and use of State assets, causing losses and wastefulness”.

The appeal trial considered the appeals by Dao Anh Kiet (former Director of the municipal Department of Natural Resources and Environment), Le Van Thanh (former Deputy Chief of the Office of the HCM City People’s Committee), Nguyen Thanh Chuong (former head of the office’s urban division), and Truong Van Ut (former deputy head of the land management division at the Department of Natural Resources and Environment).

The other defendant, former Vice Chairman of the HCM City People’s Committee Nguyen Huu Tin, did not appeal against his seven-year prison sentence.

The jury said the defendants’ behaviours and roles in the case were tried comprehensively at the first-instance trial in December 2019, and they also failed to provide any new extenuating circumstances at this appeal trial. Given this, the jury rejected their appeals and upheld the initial sentences.

Wrongdoings in this case were found after an investigation into the now-jailed Phan Van Anh Vu (also known as Vu “nhom”, Chairman of the Board of Directors of the Bac Nam 79 Construction JSC and the Nova Bac Nam 79 JSC) and his accomplices was expanded.

In 2014, Phan Van Anh Vu, in the name of a “shell organisation of the Ministry of Public Security’s General Department of Intelligence”, signed many documents or proposed leaders of the Ministry of Public Security request the HCM City People’s Committee to assist and create conditions for him to rent the State-managed land and building at No. 15 Thi Sach street to serve activities of the public security sector.

However, after receiving the land and building, Vu did not use them for police activities but carried out construction at this prime location for self-interest.

When then Vice Chairman of the HCM City People’s Committee Nguyen Huu Tin, received the request for permitting the Bac Nam 79 Construction JSC to directly sign a lease contract for the land lot at 15 Thi Sach, he did not report the issue to the then Chairman of the People’s Committee but assigned the municipal Department of Natural Resource and Environment to give procedural guidance.

After that, Le Van Thanh, Nguyen Thanh Chuong, Dao Anh Kiet, and Truong Van Ut proposed Nguyen Huu Tin rent out the land, sell the building and reduce the land rental for the land and building at 15 Thi Sach that ran counter to regulations. 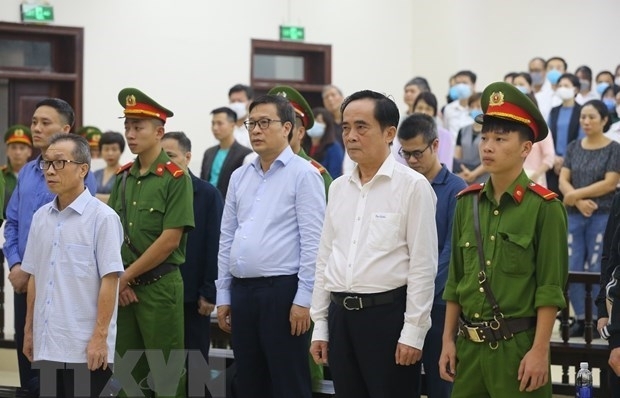