It is the only island commune in Hai Ha district, about 330 km from the capital city of Hanoi.

To reach the island, visitors have to move to Hai Ha port, about 40-50km from Mong Cai city, by car or motorbike.

Cai Chien island covers nearly 2,500 hectares with 120 households and 550 people. It attracts visitors by its pristine beauty and peaceful atmosphere that are rare to find in other places.

Coming to Cai Chien, holidaymakers can immerse themselves in another world, making a break with the hustle and bustle of big cities.

Most of the beaches in the island have been untouched with long stretches of white sand.

Lying in the east of the island, Dau Rong (dragon’s head) beach is considered the most beautiful with blue sea and a 2km stretch of sand. Coming here, vacationers can be spoilt for swimming or stroll along the beach to enjoy the fresh air.

They also can rent a boat to visit Thoi Xanh island. From here, they can look out to Co To, Hon Trui and Hon Vinh Thuc islands.

Particularly, Cai Chien island is endowed with a rich forest ecosystem, including many wild species.

Life on the island is very rustic. Visitors can ride a bike or take a stroll to learn about culture and daily life of locals. They can also get up early to enjoy the fresh air and see the sunrise.

The most interesting way to explore Cai Chien island is camping. It is a good idea to go with friends and together join a BBQ party right on the beach.

Cai Chien is also popular for its fresh seafood directly caught by islanders.

In recent years, the number of tourists to Cai Chien has been increasing thanks to the untouched beauty of the island.

Local authorities have encouraged people to join hands to keep the environment in the island clean, green and beautiful, and have opened training courses on community-based tourism.

Dozens of households in the island have invested in homestay tourism with hundreds of rooms to serve holidaymakers.

The tourism sector in Quang Ninh province has been growing at a fast pace in recent years.

In particular, Ha Long Bay literally “descending dragon bay”, was twice recognised as a World Natural Heritage site by UNESCO in 1994 and 2000.

Therefore, local authorities have been offering many incentives to promote the launch of flights to the airport, the first of its kind invested by a private business in Vietnam.

Passengers on flights to Van Don can visit a number of local attractions including the complex of Yen Tu monuments and landscapes, the world natural heritage site of Ha Long Bay, and Bai Tu Long Bay free of charge within 30 days since their arrival at this airport. 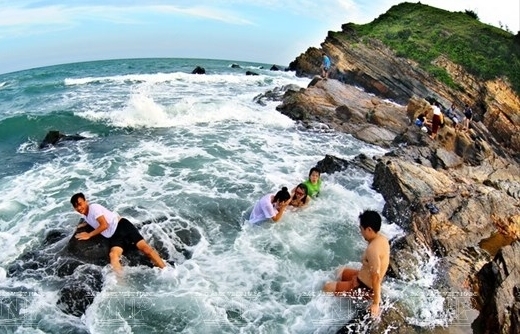