February 04, 2015 | 15:31 (0) user say
Tweet Email Print
A project to build a large suspension bridge spanning the Saigon River to link Districts 1 and 2 in Ho Chi Minh City kicked off at a groundbreaking ceremony on Tuesday. 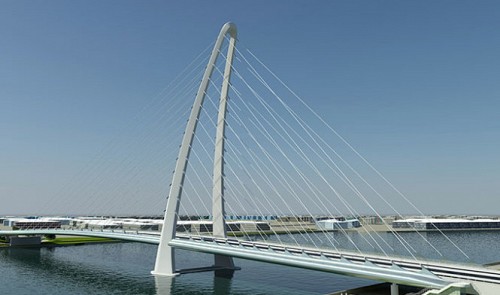 Dai Quang Minh Real Estate Investment Joint Stock Company, the project’s investor, and city authorities broke ground on the construction of the Thu Thiem 2 Bridge at a total cost of about US$145 million.

WSP Finland, a multi-disciplinary consultancy based in Finland, created the basic design for the bridge, and the design has been verified by the Ministry of Transport, said Tran Ba Duong, general director of the company.

The bridge will be 1,465 meters long and have six lanes for two-way traffic. It will also have a 113 meter-tall tower leaning towards Thu Thiem in District 2.

Once the bridge is complete, the tower will serve as a “welcome gate” to people traveling from the city’s downtown to the Thu Thiem area.

The bridge will start at the intersection of Ton Duc Thang and Le Duan Streets in District 1 and will run along Ton Duc Thang street before crossing the river to connect with Curve Avenue R1 in the New Thu Thiem Urban Area in District 2.

The project is being developed under the BT (Build-Transfer) form and is scheduled for completion on April 30, 2018, after 38 months of construction.

The initial investment for the project is VND4.26 trillion ($194.8 million), but city authorities, with the approval from Prime Minister Nguyen Tan Dung, have assigned 13.6 hectares of land to the investors so that it can develop another project at the same time as the bridge. 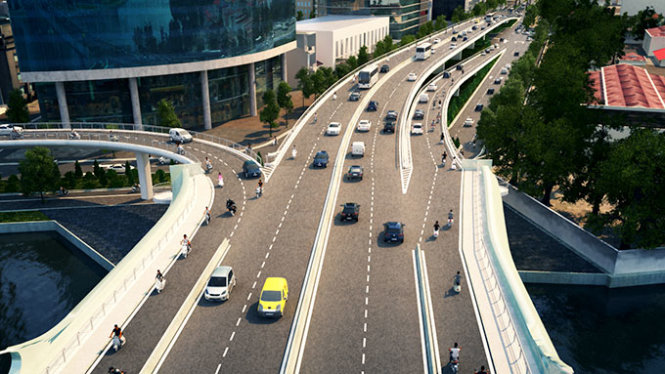 This artist’s impression shows six lanes of the Thu Thiem 2 Bridge, of which the construction started on February 2, 2015 in Ho Chi Minh City. Photo: Tuoi Tre

Under such an arrangement, the total investment in the bridge has been reduced to VND3,082.5 billion ($145 million), the investor said.

Upon its completion, the bridge will facilitate traffic flow between the Thu Thiem New Urban Area and the downtown area in District 1, and boost the city’s social-economic development, the investor said.

The bridge will be the second to connect the Thu Thiem area to District 1. The Thu Thiem 1 Bridge was opened to traffic in late 2007.

Speaking at the groundbreaking ceremony, Nguyen Huu Tin, deputy chairman of the HCMC People’s Committee, requested that the investor ensure industrial safety and construction quality during the building of the bridge, which he said will create momentum for the development of the Thu Thiem area.

He called on the investor to try to complete the project at the soonest possible time.

The bridge will not only be of great importance to the city but also to the region and the country in general, said Minister of Transport Dinh La Thang at the ceremony.

The minister also asked the investor to ensure the quality of the new bridge and cut down the construction time from 38 months to 30 months.