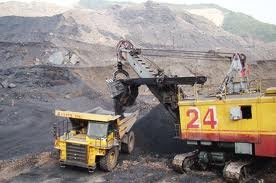 The group just proposed the government relax current export duty levied on coal from 20 to 10 per cent to help it drain unsold stock which amounted to nine million tonnes as of July 31, 2012.

Earlier, in Notice 231/TB-VPCP dated July 2, 2012 the premier asked to carefully consider coal export duty with no revision in the near-term.
Vinacomin, however, on July 16 released a document asking the government for 10 per cent export duty reduction and later on August 13 took the same move.

In the year ending July, Vinacomin sold 21.8 million tonnes of coal, tantamount to 47.9 per cent of the year’s plan and 82 per cent of last year’s corresponding period.

Of this, 7.2 million tonnes were shipped abroad, sliding 24 per cent on-year. Sinking consumption cast a dent in the group’s revenue figures which shed 18 per cent on-year and approximated 46 per cent of the projection.

Vinacomin saw a five million tonne decline in coal consumption compared to signed contract amount as local coal consumers cooled coal volumes in the face of lingering economic difficulties.
This made the state group to revise its 2012 production to 39 million tonnes.
“This revised volume is just 85 per cent of the year’s projection which got the premier’s approval and tantamount to 87 per cent of 2011’s figure,” said Chuan.

Chuan said thousands of Vinacomin labourers would be sit idle on the back of retrenching production.

“In this context, total tax and charge rate levied on export coal reaches nearly 40 per cent, including 20 per cent export duty, 10 per cent non-deductible value added tax, 6 per cent royalty tax, environmental fee VND10,000 per tonne of export coal paid to state budget, and 3 per cent exploration and environmental charge at firms. Thereby, if all these tax and fee were factored on Vinacomin would run at losses in export coal business if it could not sell coal,” according to a Vinacomin record sent to the government on August 13, 2012.

Meanwhile, Vinacomin would incur more than VN8 trillion ($400 million) loss derived from the coal volume selling to the power sector as the selling price is lower than the production cost.