Vietnamese should be allowed to gamble at casinos: Proposal

August 16, 2013 | 15:32
Tweet Email Print
The agency that verified a draft decree on casinos has proposed that Vietnamese be allowed to gamble at casinos on a pilot basis, said the chairman of the National Assembly’s Committee for Finance and Budget. 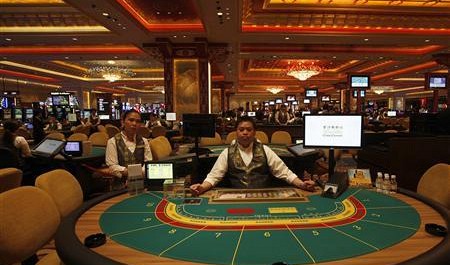 Chairman Phung Quoc Hien made the statement while presenting to the NA a report on the verification of the draft decree on casinos at a meeting of the NA Standing Committee on Wednesday morning.

Specifically, he said that Vietnamese should be allowed to gamble on a pilot basis at the casino in the Van Don Special Economic Zone in northern Quang Ninh Province.

Currently, Article 10 of the draft Decree stipulates that only foreigners and overseas Vietnamese that hold a valid passport granted by a competent foreign agency and have entered Vietnam legally are allowed to gamble, Hien said.

Most of the members of the Committee for Finance and Budget agree with the regulation, saying that this is a sensitive business that should not be encouraged and that there would be many potential social consequences if the government allows Vietnamese to gamble at casinos.

However, Hien said, there is a reality that many Vietnamese frequently travel from Vietnam to Cambodia, Singapore and other countries to gamble, bringing foreign currencies with themselves.  Such an uncontrolled gambling situation has caused the so-called “foreign currency bleeding”, and led to many social impacts.

Therefore, some members of the verifying agency proposed that the Government allow Vietnamese to gamble under control at the Van Don Special Economic Zone, provided that they can satisfy criteria on identification and income, among other requirements.

After pilot period in Van Don, the allowance of Vietnamese to play at casinos will be extended to other gambling locations, Hien said.

At the meeting, Deputy NA Chairman Nguyen Thi Kim Ngan said the Politburo has agreed to consider allowing Vietnamese to gamble at the casino in Van Don.

To date seven businesses have been licensed to enter the casino sector. Of these, five casinos operate on a small scale (15 gambling tables and 80 gambling machines at each casino) in Hai Phong, Lao Cai, Da Nang, and Quang Ninh, while two others operate on a large scale in Quang Nam and Ba Ria-Vung Tau Provinces, said Finance Minister Dinh Tien Dung.

Under the Decree,  businesses applying to open a casino must meet many conditions, including having an investment capital of over US$4 billion and having 10 years of experience in the sector, Dung said.

However, many members of the NA Standing Committee said the Government should have a concrete plan to set up casinos based on the characteristics of each area, not just on the abundant financial capability of the investors who apply to open a casino.

NA Chairman Nguyen Sinh Hung said the draft Decree should specify which localities are available for casinos to be set up. In addition, such casinos should be set up in connection with large recreational centers, he added.

Regarding other parts of the draft decree, the Committee for Finance and Budget said that the document only stipulates acts that casino operators are banned from doing, while it does not specify outlawed acts related to gamblers or concerned State agencies in charge of examining and inspecting casinos.

“Therefore, the Committee asked that the draft decree include a regulation on what is banned for each relevant subject other than casino operators,” Hien said.

The Committee also suggested that the draft Decree, after being approved, should take effect no sooner than January 1, 2014, so that law enforcement agencies have enough time to prepare for the implementation of the Decree.