May 22, 2018 | 10:21
Tweet Email Print
Prime Minister Nguyen Xuan Phuc has asked the Health Ministry to work with departments and localities to improve workers’ health by establishing a network of hospitals and medical stations near industrial zones.

Speaking at a meeting in the northern province of Ha Nam with nearly 1,000 workers at industrial zones (IZ) in the Red River Delta, Phuc said businesses must also pay attention to improving working conditions by offering regular health check-ups and lunches to workers.

He also said meetings like the dialogue he attended needed to be made regular to promptly deal with workers’ concerns, following two similar dialogues in the southeastern and central regions.

The government leader requested building standard kindergartens for workers with the involvement of the private sector and directed Hanoi City and other localities to earmark land for building accommodation for workers.

Regarding salary, he said that under the Resolution on salary reform adopted by the five-day seventh plenum of the Party Central Committee, held in Hanoi earlier this month, the State regulated the minimum salary level to protect workers. Beyond that, enterprises will negotiate salaries with workers to ensure that their pay correlates with their work efficiency.

For pension for female workers who retire after January 1, 2018, the Ministry of Labour, Invalids and Social Affairs was required to submit a plan to the government that ensures they will not be put at a disadvantage.

Early retirement and special pension for workers in hazardous fields needed to be taken into consideration when amending the Law on Social Security, he said.

During the dialogue, workers talked about their difficulties in daily life, work, salary, housing, kindergartens and schools for their children, social activities, work safety, food safety and security and expressed hope to have more support from the Government and local authorities.

President of the Vietnam General Confederation of Labour (VGCL) Bui Van Cuong said following the PM’s dialogue with workers in southern economic zones in 2016, a number of firms and localities expressed readiness to partner with the government and trade unions to offer welfare to trade unionists and workers.

The VGCL signed agreements with 18 corporations to bring products and services to workers with a 5-25 per cent discount. Its chapters also reached 1,139 deals with firms and partners to benefit 1.7 million trade unionists with products and services at preferential prices of over VNĐ526 billion (US$23.4 million).

In 2016-17, VGCL from grassroots levels held more than 11,700 meetings with local administrations, employers and workers to listen to their feedback and answer questions.

In response to a question about housing and preschools for children of workers in industrial and processing zones, Chairman of the Hanoi City People’s Committee Nguyen Duc Chung said the city built a kindergarten in Bac Thang Long Industrial Park and assigned the outlying district of Dong Anh to build additional two preschools in the park. In August, apartments in the park will be sold at VNĐ200–400 million ($8,900-17,800) each. The Hanoi Transport and Services Corporation was also asked to increase bus services to and from the park.

The PM visited an exhibition of products made by firms in the Red River Delta, presented 65 scholarships to workers, funds to build 18 houses for poor workers, and a computer set to worker Vu Xuan Dat from the northern province of Hai Duong. 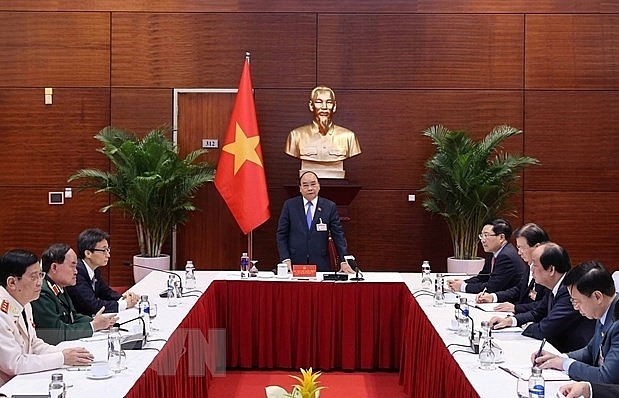