July 04, 2020 | 21:52
Tweet Email Print
The new wave of foreign investment triggered by COVID-19 and US-China trade tensions has become more visible, with outstanding overseas ventures being expanded in the first half of the year.

Multinational corporation Techtronic Industries (TTI), which is developing a $650 million plant complex in Saigon High-tech Park, recently met with more than 100 domestic suppliers to find a vendor for its project, which will focus on manufacturing hand-held cordless power tools and outdoor power equipment while being at the forefront of lithium-ion batteries, digitally-controlled motors and tools, and wireless applications.

Vietnam is very attractive for TTI due to its deep integration into the global market and recent free trade agreements, especially the ASEAN-Hong Kong Free Trade Agreement which came into effect a year ago, and the new EU-Vietnam Free Trade Agreement.

According to Nate Easter, executive vice president of Global Sourcing and Outdoor Product Operations from TTI, domestic vendors would be essential to ensuring the success of its incoming complex, which is the second-largest plant in its global network and houses a research and development (R&D) centre.

TTI expects to have an annual production value of $1.5 billion by the third year and achieve up to $3 billion by the sixth year. It also targets $1 billion in annual localised supply and expects to increase local suppliers from 80 now to 150 over the next few years.

TTI was not the only company which has processed operations in Vietnam in the first half of the year.

In February, HEINEKEN Vietnam also poured an additional $68.8 million into its factory in the southern coastal province of Ba Ria-Vung Tau. The beer producer was green-lit by the local authority to raise its investment capital from $312.5 million to $381.3 million.

With the additional funding, HEINEKEN Vietnam expects to increase the annual capacity of its factory in Ba Ria-Vung Tau from 610 million litres to 1.1 billion litres in 2020.

Meanwhile, in March, the US' Universal Alloys Corporation (UAC) held the inauguration ceremony for the first phase of it saerospace component factory in the central city of Danang. With registered investment of $170 million, the factory aims to manufacture and install aerospace components from aluminium alloys and composite.

It will be capable of manufacturing and assembling around 4,000 aircraft components, all for export. Once put into operation, it is estimated that annual export revenues will reach $25 million by 2021, $85 million by 2022, and $180 million after 2026.

UAC is a leading global manufacturer of aircraft components for aerospace companies such as Boeing, Airbus, Embraer, Bombardier, and their associated supply chains. This is its first facility in Vietnam and Asia as a whole to serve the global aerospace industry.

With these new facilities, Qualcomm Vietnam is further strengthening its commitment to the country and further enables local enterprises to innovate and deliver Vietnamese-made products.

According to Michael Kokalari, chief economist from Vinacapital, a new wave of foreign direct investment (FDI) into Vietnam is imminent. “This is being driven by global events, including the US-China trade war, the ongoing pandemic, and other factors,” Kokalari said in his latest statement released in June.

The amount and quality of this new wave of FDI are largely up to local policymakers, he added, because there are few countries in the world as intrinsically attractive to multinational manufacturers as Vietnam.

Kokalari cited that this next wave of FDI will have a bigger impact on Vietnam’s economy than previous inflows because multinationals now have an incentive to help local firms “move up the value chain” in order to build supply chains in Vietnam capable of supporting those foreign-invested companies.

The EuroCham Whitebook 2020 released at the end of June stated that Vietnam’s stable macro-economic climate and single digits of inflation are increasing the confidence of investors in this country.

“Since becoming a member of the World Trade Organization in 2007, Vietnam has continued to reform its legal framework so that it is better aligned with global standards. As a result, the country has become more attractive to foreign enterprises and international investors,” stated the Whitebook. 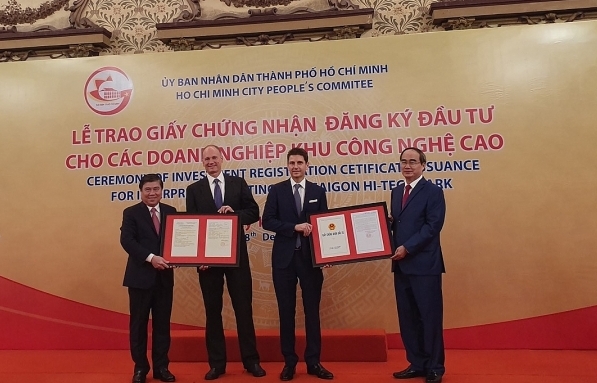