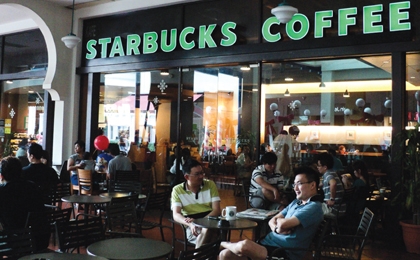 Jinlong Wang, senior vice president of Starbucks and president for Asia Pacific, told VIR in an exclusive telephone interview that the US-based company would operate Starbucks stores in Vietnam via its long-term franchise relationship with Hong Kong Maxim’s Group.

The first Starbucks store will be located in Ho Chi Minh City, the southern economic hub of Vietnam, which is the world’s  second largest coffee producer after Brazil.

The proliferation of Starbucks poses new competition for home-grown cafes such as Trung Nguyen and Highlands Coffee, as well as foreign shops operating in Vietnam such as the US-based Coffee Bean & Tea Leaf and Australia’s Gloria Jean’s.

Wang said his firm had granted Coffee Concepts (Vietnam) Limited, a Hong Kong Maxim’s Group subsidiary, the licence agreement for the Vietnam market. The new company will be the licensed for operating Starbucks stores in the country, “delivering the legendary Starbucks Experience to customers, and maximising the growth potential of the Starbucks brand in Vietnam,” he said.

“We will offer a community gathering place where people come together, connect with family and friends and celebrate the local Vietnamese coffee culture and heritage,” added Wang.

“Starbucks is deeply respectful of Vietnam’s long and distinctive local coffee culture. We know coffee is a national pride for many Vietnamese and as such, we look forward to contributing and growing Vietnam’s already vibrant coffee industry. As we continue to source more Vietnamese high-quality, arabica coffee we want to leverage our scale to bring the best of Vietnam’s coffee traditions to the rest of the world,” Culver added.

The global coffee company said it already purchased “a notable amount of some of the highest-quality arabica coffee” from Vietnam and “is committed to sourcing more arabica coffee from the Vietnam region over the long-term.” It will introduce customers globally to the rich Vietnamese coffee heritage.

“We are looking forward to leveraging our expertise and deep understanding of the Starbucks brand to welcome Vietnamese customers to our stores, earning their trust and respect with the unparalleled Starbucks Experience, known by customers around the globe,” Michael Wu, chairman and managing director of Hong Kong Maxim’s Group, said in the statement.

Starbucks has been re-organising its business to focus on the Asia Pacific region, the biggest growth market for the company. It currently operates more than 3,300 stores across 11 countries in the region.