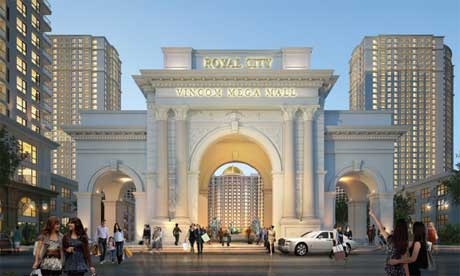 Boasting entertainment features never featured in Vietnam before,  Vincom Mega Mall Royal City is scheduled to  open in July, 2013. Vingroup has invested in an international Mega Mall system dubbed  “all in one” with the purpose: “One destination – all needs – many options”.

With total space of more than 230,000sqm spreading on two underground floors and two podium floors, the objective is to create a shopping paradise that surpasses al others in Asia, developers say.

Shoppers who come to this super shopping centre will find up to 800 outlets featuring a wide variety of goods as well as a romantic and cozy ambience is for culinary satisfaction. Vietnam culinary street promises to be a meeting place for friends and families. With a total area of more than 44,000sqm, the street is expected to feature more than 170 restaurants featuring a vast range of cuisine, but especially Vietnam’s favourites.

In addition to shopping and dining and familiar entertainment options, visitors to Vincom Mega Mall Royal City will also be offered chance to explore unconventional attractions.

Plans for Vincom Mega Mall includes a world-class indoor water park. With the total space of more than 24,000sqm and its distinctive facilities, Vinpearl Water Park Royal City is expected to surpass others in Vietnam and rival the best such attractions in North America, Europe and Japan.

Last but not least, the Mega Mall will also boast the first-ever ice rink in Vietnam. Covering more than 3,000sqm, this rink is expected to meet visitor demand year-round.