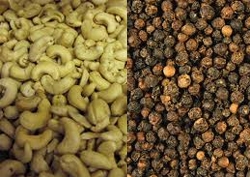 The figures represented year-on-year increases of 10.8 per cent in volume and 13.4 per cent in value, according to the Ministry of Agriculture and Rural Development.

The year 2010 marked the first year the cashew sector joined the country’s group of staples with export revenue reaching over $1 billion.

Nguyen Thai Hoc, chairman of the Vietnam Cashew Association (Vinacas), said Vietnamese cashew nuts had penetrated into 52 countries and territories worldwide. The US, China and the EU still remained the country’s major import markets with market share making up 35 per cent, 20 per cent and 25 per cent, respectively.

Vietnam planned to earn $1.5 billion from cashew exports in 2011, up 32 per cent in value as compared with last year, Hoc said, noting that this was a “hard task” due to several obstacles from the shortage of materials and labour to undiversified products and increasing processing costs.

The country has to import about 250,000 tonnes of raw cashew nuts each year as its total output of about 350,000 tonnes can meet only 60 per cent of domestic processors’ demand, Hoc added.

To reach sustainable development, the cashew sector set a target of keeping the growing area at 315,000-350,000ha in 2020, focusing on the southeastern region, the Central Highlands and the southern central coastal region.

The industry is making great efforts to raise cashew productivity to 1.2-1.4 tonnes per ha in 2020 from nearly 1 tonne per ha at present, and increase cashew nuts’ value through developing varieties of high production, good quality, contributing to building up made-in-Vietnam cashew nuts.

In 2010, Vietnam earned $419 million from shipping abroad 116,000 tonnes of pepper and continued taking the lead in pepper exports worldwide.

According to the Ministry of Agriculture and Rural Development, despite a year-on-year shrink of 13.3 per cent in volume, pepper export turnover rose 22.5 per cent mostly due to the global increase of pepper price.

According to Tran Duc Tung, general secretariat of the Vietnam Pepper Association (VPA), in 2010, the country’s pepper export revenue set a record since 1996, which is attributed to the fact that the country has applied the supply-demand strategy in the global market to control the price.

Vietnam ’s pepper makes up 50 per cent of the global market share, Tung said, adding that, the pepper price is forecasted to remain high due to the increasing global demand.