November 30, 2021 | 10:00 (0) user say
Tweet Email Print
Vietnam’s trade and investment ties with Japan are witnessing a new chapter for development, with both nations agreeing to further their cooperation in various sectors painted by strong fresh commitments.

On the occasion of his visit to Japan last week, during a meeting with former Japanese Prime Minister Suga Yoshihide last week in Tokyo, Vietnamese Prime Minister Pham Minh Chinh attended a ceremony on the export of Unshu tangerines to Vietnam. This is a speciality that Yoshihide committed in October 2020 to promote for exports to the Southeast Asian market. On November 28, the first batch of Unshu tangerines, about two tonnes, were exported to Vietnam as part of both nations’ efforts to promote exports and imports of their speciality fruits, including the Japanese mandarin and Vietnam’s lychee and longan. Japan is considering accelerating the licensing process for importing Vietnam’s longans in the 2022 crop year. The facilitation of exports of these products is expected to help raise the Vietnam-Japan trade ties.

The bilateral trade turnover in the first 10 months of 2021 hit $34.13 billion, with Vietnam earning $16.09 billion, up 2.2 per cent on-year, and spending $18.04 billion on imports from Japan, up 9 per cent on-year, according to the Vietnamese Ministry of Industry and Trade.

“When faced with any difficulty, the relevant agency must solve it. If the issue fails to be solved, you can send me a letter,” stated PM Chinh when he met with leaders of ENEOS, AEON, Marubeni, Fast Retailing, Mitsui, and Sojitz in Tokyo, and addressed an investment promotion conference which was attended by many Japanese investors and businesses and where over 40 cooperation deals on many sectors were granted to ministries, agencies, localities, and enterprises of Vietnam and Japan.

The business leaders also announced new investment plans in Vietnam. Tsutomu Sugimori, chairman of ENEOS Corporation said, “We will continue investment activities in many fields, especially the development of renewable energy, in Vietnam.” ENEOS, one of the largest energy groups in Japan in terms of oil refining and raw materials, accounts for 50 per cent of Japan’s oil output. ENEOS has total annual revenues of about $70 billion and has been operating in Vietnam since 1990. In 2016, it became a strategic shareholder of Vietnam National Petroleum Group and is expanding its supply chain and store network.

In another case, retailer AEON’s president and CEO Motoya Okada said the group’s total revenues last year reached $75 billion. In Vietnam, the company has invested $1.18 billion since 2014. AEON will double the number of its trade centres in the nation, and also list itself in the Vietnamese stock market and export local goods like aquatic products and garments to Japan.

Meanwhile, Masumi Kakinoki, president of Marubeni, said his group wants to implement power projects and infrastructure development in the northeastern province of Quang Ninh. Soon, Marubeni will build plants to process paper and coffee in Vietnam. Masayoshi Fujimoto, Sojitz president and CEO, said his group is running 17 joint ventures in Vietnam with total revenues of around $1 billion in equipment production, energy, chemicals, electricity, fertiliser, and forestry. Currently, Sojitz wants to carry out carbon-reduction projects in Vietnam.

Phan Duc Hieu, a member of the National Assembly Economic Committee, said funding from Japan into the Southeast Asian market increased strongly over the past year.

According to the Vietnamese Ministry of Planning and Investment, as of October 2020, Japan had over 4,600 valid investment projects in Vietnam, registered at $59.9 billion. However, one year later, the number of projects rose to 4,765 at $63.94 billion, making Japan the second-largest foreign investor of Vietnam. The north-central province of Thanh Hoa is the biggest destination for Japanese investment, registered with $12.5 billion and accounting for nearly one-fifth of total foreign direct investment (FDI) in Vietnam.

“The rise in investment from Japan demonstrates high confidence from investors from Japan in Vietnam, which is boosting major attractiveness in general,” said Hieu.

In January, the joint venture between Vietnam Trading Engineering Construction JSC and Japan’s Marubeni Corporation received an investment registration certificate for the 1,050MW O Mon II thermal power plant project in the Mekong Delta city of Can Tho, which is costing $1.33 billion. Meanwhile, Kraft Vina Paper Factory is funded by Japanese investor Rengo and Thailand’s SCG Packaging in the northern province of Vinh Phuc, with annual capacity of 800,000 tonnes, and total registered capital of $611.4 million. The project, making kraft, lined, and packaging paper, was licensed in May.

Moreover, Japan is also the largest provider of official development assistance (ODA) for Vietnam, with about $27 billion so far. According to the Japan International Cooperation Agency (JICA), in the fiscal year from April 2020 to March 2021, the total ODA commitment for Vietnam was $436.56 million. The period saw about 100 projects funded by Japan. The country’s total financial support for Vietnam in infrastructure development, especially transport, is estimated to be over $10 billion so far.

“About 70 per cent of Vietnam’s national roads are built and upgraded through ODA from Japan. Completed projects have helped boost connectivity within ASEAN and facilitate the flows of goods supply chains and public travelling. This has also helped localities attract more FDI,” said a JICA report released last month.

According to a joint statement titled “Toward the opening of a new era in Japan-Vietnam Extensive Strategic Partnership for Peace and Prosperity in Asia” released last week during PM Chinh’s official visit to Japan, he and PM Kishida Fumio consented to further facilitate business collaborations between Japanese and Vietnamese companies as well as improving the investment environment for companies through cooperation in such areas as digital transformation, diversification of the production base and development of supporting industries towards resilient global supply chains, including of both countries, which are keys for post-pandemic economic revitalisation.

“Both sides will continue cooperating in industrial development, and will consider expanding the scope of cooperation in training and consultation on kaizen, business matching, and capacity building for Vietnamese manufacturers to enable them to join Japanese companies’ supply chain in Vietnam, in the region and the world,” the statement said.

Both leaders also shared their perceptions of digital transformation and the development of the digital economy. They consented to strengthen cooperation in creative innovation, ICT, digital transformation, digital economy, realisation of smart cities via project formation studies, the development of broadband infrastructure including 5G, and information security. “Vietnam looks forward to working with Japan to enhance the effectiveness of existing cooperation mechanisms while putting forward new ones to jointly pave the way for a new development phase in the Vietnam-Japan Extensive Strategic Partnership,” PM Chinh told the media.” 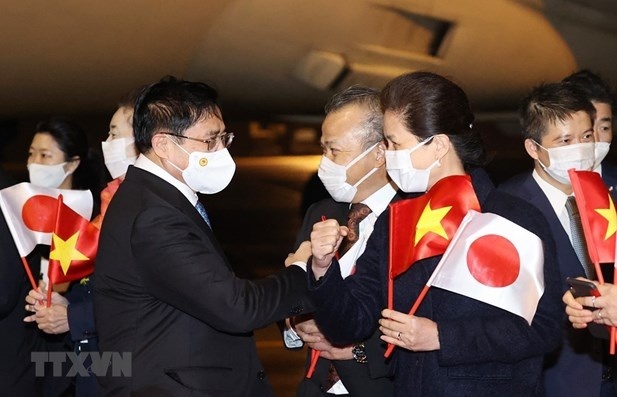 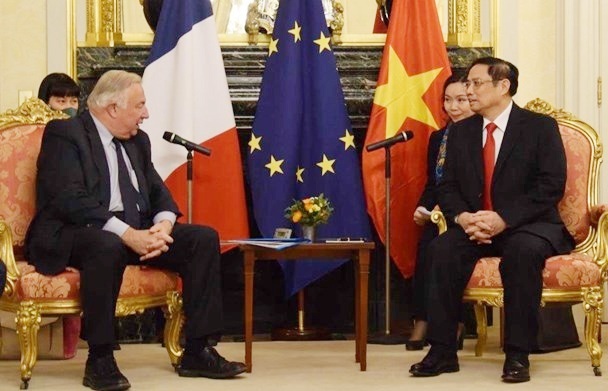 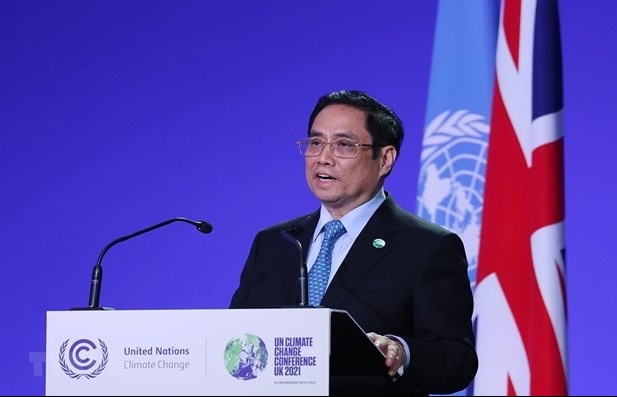 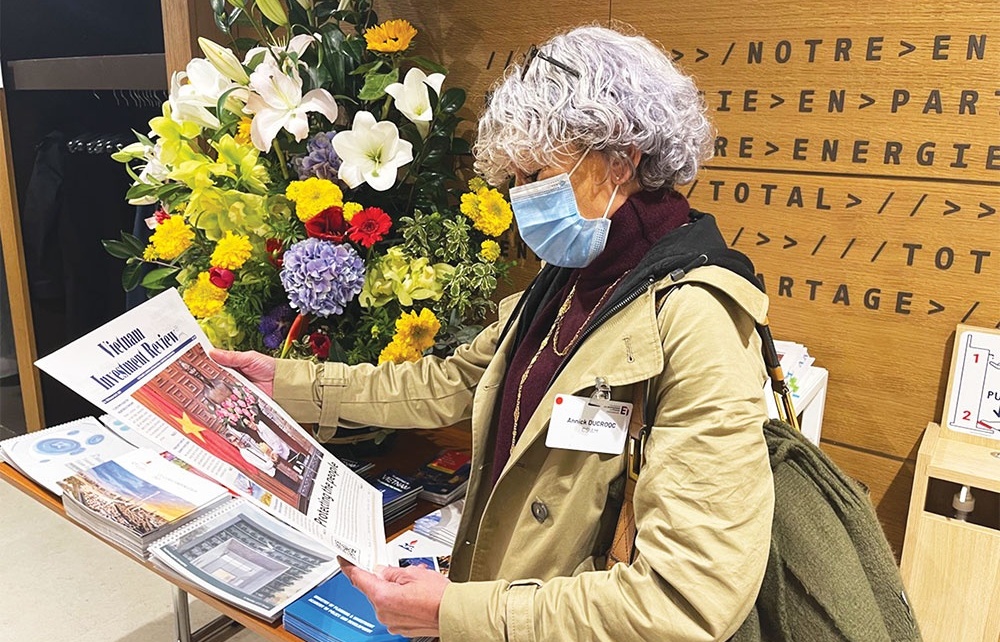