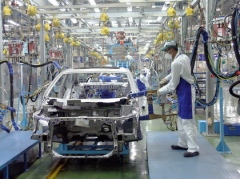 “Vietnam’s automotive industry has faced the most dramatic decline in sales ever with total sales dropping 40 per cent year on year in the first five months of 2012,” said VAMA.

In addition, a number of new fees expected to be imposed soon, especially fees used to limit personal vehicles in the biggest cities in Vietnam, including Hanoi and Ho Chi Minh City, has helped lower the temperature of the currently-freezing market.

Domestic companies and auto traders told the Saigon Times Daily that buyers are hesitant as a high fee will likely be imposed to limit the use of private vehicles. If the government fails to make clear their plans for the fee, the local auto market will be frozen or continue to slump.

As a result, VAMA has proposed Hanoi and Ho Chi Minh cities' governments consider reducing registration fees for passenger cars to 10 per cent.

Around 6,870 automobile units were sold in Vietnam last month, a 2 per cent month-on-month fall, said VAMA.

Among them, as many as 5,710 units were assembled in Vietnam, while more than 1,000 completely built units (CBUs) were imported from overseas.

Only Vietnamese auto maker Truong Hai and Toyota sold more than 1,000 units in May, with 1,898 units and 1,602 units respectively.

However, Truong Hai, who leads the market in terms of sales volume in recent times, also saw a 29 per cent year-on-year decline in May.

The sales of local automakers kept declining despite the offering of a series of promotional and customer care programmes.

They also launched new products to draw the attention of customers.

But all the aforementioned efforts seem to have been in vain.

Last month, Mercedes-Benz Vietnam sold 142 cars, a 63 per cent year-on-year drop, though having launched a huge discount programme slashing the price of some luxury cars by over VND1 billion each.

Other automakers under VAMA also reported disappointing sales data in May despite their efforts in launching as many big sales as they could.

Ford Vietnam has just announced a discount programme with biggest discount amounting to VND100 million for all its locally assembled vehicles.

The respective figures at Honda Vietnam, Isuzu Vietnam and VinaStar (Mitsubishi) were around 100, 112 and 103 units.