October 21, 2022 | 10:00 (0) user say
Tweet Email Print
The Vietnamese government has rolled out a plan to develop several new airports, with billions of dollars expected to be poured into local facilities, contributing to the shaping of new economic zones across the country.

Nguyen Van Vinh, deputy director of the Vietnam Institute for Development Strategies under the Ministry of Planning and Investment, welcomed the developments.

“The development of new small airports is necessary, especially as Vietnam’s airport network remains smaller than in many countries in the region. With an open economy, Vietnam has witnessed a rising demand for travel and trade activities,” he told VIR’s roundtable on airport development on October 11.

The International Air Transport Association has forecast that, by 2035, Vietnam’s aviation sector will cater to up to 136 million passengers, double the expected number this year. However, Vietnam has only 22 airports, with many domestic terminals exceeding their designed capacity.

There are several examples from the past and present showing how airfields provide a boost to localities across the country.

Phu Quoc International Airport was built on the site of an old airfield developed during the French colonial period, and now it is one of the most visited areas of the country, while Quang Ninh is the first northern province to have a completely new airport since 1975.

Van Don International Airport, developed by Sun Group, is the first private airport in Vietnam. A civil and military facility in Quang Ninh, only 20km from Cam Pha city, it is expected to be the backup for Noi Bai International Airport in Hanoi. This contributes to shaping an important economic pole for the northeast localities of Quang Ninh, Haiphong, Hai Duong, and Hung Yen.

The economic area boasts a strategic location and abundant workforce to lure foreign direct investment. Vietnam Chamber of Commerce and Industry data shows that the four localities are magnets to foreign investors with over 2,000 related projects, trailing behind Ho Chi Minh City, Hanoi, and the southern province of Binh Duong.

Looking further afield, China has successfully developed its local airport system, and the question is whether Vietnam can attract private investors to develop local airports.

The Civil Aviation Administration of China has rolled out the red carpet for private investors to raise funding for civil airports.

Chinese policymakers set the goal of reducing state-owned airports while promoting the public-private partnership model in the development and exploitation of new airports.

The move is expected to ease financial pressure on the government and accelerate the construction progress. As of 2021, China boasts 248 airports, as reported by the Centre for Aviation.

Plans released in February 2021 indicate that China aims to have 400 civilian transport airports by the end of 2035 based on the estimated increase in passenger numbers. It means China will average around 10 new airports a year by 2035.

The Vietnamese government plans to develop 14 local airports by 2030, but this will depend on the market’s demand and the local community, with experts in the field pointing out that localities need to identify the reasonable level and potential for airport development carefully.

Industry leaders made clear at VIR’s roundtable last week on small airport development that assigning reasonable responsibility between the state and the private sector will help monitor investment risks for these projects. 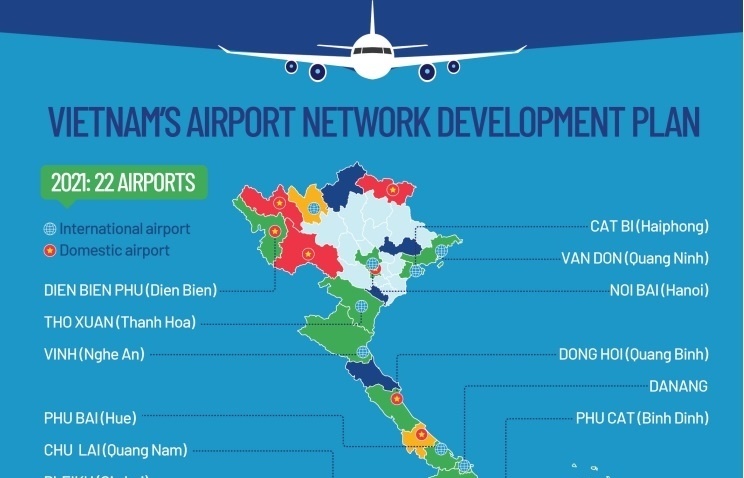