March 20, 2014 | 08:50 (0) user say
Tweet Email Print
Malaysian authorities on Wednesday dismissed reports that islanders from the Maldives had seen a "low-flying jumbo jet" that could have been the missing MH370 plane. 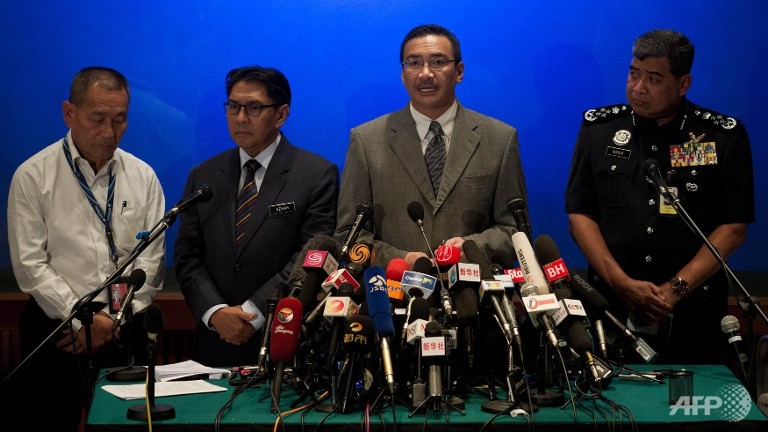 KUALA LUMPUR: Malaysian authorities on Wednesday dismissed reports that islanders from the Maldives had seen a "low-flying jumbo jet" that could have been the missing MH370 plane, implying another false alarm in the 11-day search for the aircraft.

Malaysia's Acting Transport Minister Hishammuddin Hussein told reporters at a news conference in Kuala Lumpur on Wednesday that the Maldives air force chief had informed him that the reports were "not true".

Police in the Maldives, a honeymoon destination in the Indian Ocean, began investigating on Tuesday after the national Haveeru newspaper reported that residents of a remote southern island had spotted a large plane flying over them on March 8.

Haveeru said witnesses on Kuda Huvadhoo had seen a white aircraft with red stripes flying low towards the southern tip of the Maldives on the morning the plane disappeared.

"I've never seen a jet flying so low over our island before. We've seen seaplanes, but I'm sure that this was not one of those. I could even make out the doors on the plane clearly," the newspaper's website quoted one witness as saying.

"These people first heard a very loud noise from a plane flying unusually low and they came out to see it," Ahmed told AFP by phone from the Maldives capital Male.

But the islands' National Defence Force said on Wednesday morning that no trace of the missing flight had been picked up on radar.

"Based on the monitoring up to date, no indication of flight MH370 has been observed on any military radars in the country," it said a statement on Wednesday.

The civilian radars at the Maldives airports had also "been analysed" but there was no "indication of the said flight," the statement added.

The Maldives police and civil aviation authority confirmed that a detailed enquiry was underway and they were hopeful of giving a progress report later in the day.

"We are looking at everything from radar reports and records of the air traffic control," Hussain Jaleel, chief executive of Maldives Civil Aviation Authority, told AFP.

The hunt for the missing passenger jet, which carried 239 people en route from Kuala Lumpur, now focuses on two vast search areas -- a northern one spanning south and central Asia, and a southern corridor stretching deep into the southern Indian Ocean towards Australia.

There have been several false alarms linked to debris spotted in busy shipping lanes in Southeast Asian waters.

A New Zealand oil rig worker in the South China Sea also came forward several days after the crisis began to report he had seen an airliner in flames.

The Maldives, located far from both arcs, is not among the 26 countries currently involved in the massive international search operation.

However, neighbouring Sri Lanka on Tuesday granted Malaysia and three other countries involved in the hunt to use its air space to conduct search operations, following a request from diplomats.