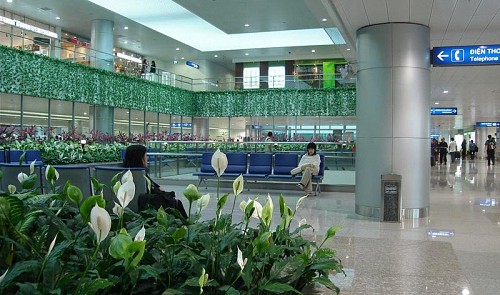 At around 10:17 am on Friday, Choat Anthony Paul, a 38-year-old Australian passenger, was waiting for his flight to depart on the second floor of the international terminal at Tan Son Nhat when he suddenly threw his baggage and himself off the building, an airport representative told Tuoi Tre (Youth) newspaper.

Paul landed on a flower bed planted in the airport lobby, the representative added.

The passenger was waiting for the flight 9W067 operated by Indian carrier Jet Airways from Ho Chi Minh City to Bangkok, Thailand, which will take off at 6:45 pm the same day, according to police reports.

Bystanders said that they could not prevent the man from jumping as the incident happened too quickly.

Police also arrived to seal off the scene to investigate the case, and operations at the airport were back to normal an hour later.

The Australian man has recovered after being taken care in the infirmary’s emergency ward, explaining that he jumped off the floor because of his frustration over family problems, according to a report from police officers.

The case is still being probed.