March 07, 2013 | 09:34
Tweet Email Print
All Nippon Airways (ANA) has written a new chapter of its development history as envisaged in the “Flying into tomorrow” clip the airline produced in celebration of its 60 years of successful operations. 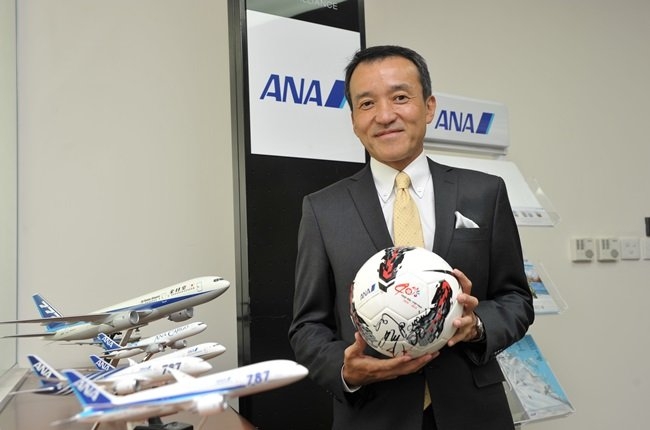 When ANA celebrated its 60th anniversary last year, the Japan’s largest airline group by passenger numbers took bold steps to further strengthen its presence in the sky by opening a slew of new routes at home and abroad as part of its strategy to become Asia’s No. 1 airline.

In the winter schedule last year, ANA commenced flights on many new domestic routes, including those between Haneda and Sapporo, Miyazaki, on October 28, Haneda and Takamatsu on December 1. At the same time, the airline spread its wings to more international airports in its key markets, including those in the United States.

Last October, ANA doubled weekly frequency between Tokyo and New York, instead of seven in the summer schedule to capitalize on the growing demand on this route. The carrier continues reaching out to more destinations stateside.

“ANA has just started the Narita-San José route, where many IT companies are based,” Fujisaki said. The Star Alliance member initially flies on the Narita-San José route with five weekly flights and will make it daily from April 2013. In the summer schedule this year, ANA will operate its double daily service between Narita International Airport and Chicago.

ANA has more to offer, especially to customers in Vietnam, thanks to its deals with partner airlines. “ANA has begun a joint venture with United Airlines, enabling passengers to enjoy extensive network to the U.S. and U.S. domestic routes, using ANA-United flights from Vietnam,” said Fujisaki. “As we are a core member of Star Alliance, our customers can benefit hugely from this big airline alliance, not only Star Alliance airlines’ wide network but also frequent-flyer program, premium customer services and so on.”

ANA now weighs the possibility to service one more airport in Vietnam, as Fujisaki said his airline believes in the growing economy and aviation market of this country. “We strongly hope we will have direct flights between Hanoi and Narita,” Fujisaki said. He assumed business passengers using ANA’s flights to and from Vietnam are increasing, particularly the passenger flow between Vietnam and Japan given the expanding relations between the two countries.

“The relations between the two countries will develop more, as Japan’s new prime minister, Mr. Shinzo Abe, chose Vietnam as the first stop of his first overseas visit,” Fujisaki said, adding that he expected ANA will contribute to building stronger bilateral ties.

ANA has sound reasons for its expectations since the stronger relations has resulted in more investment and business expansion of Japanese companies in Vietnam as well as the rising number of Japanese visitors to this country.

A recent survey conducted by the Japan External Trade Organization (JETRO) among over 4,000 Japanese investors in the Asia-Pacific region, including 250 in Vietnam, showed despite several issues, up to 57.8% of participating Japanese enterprises opted for operation expansion in Vietnam. Some 60.2% of the Japanese firms operating in Vietnam said in the survey released in Hanoi in late January that they were profitable last year.

Japan is now among the leading trade partners of Vietnam with two-way trade exceeding US$21.1 billion in 2011. The two countries look to doubling their bilateral trade value by 2020.

Japanese visitors to Vietnam are also on the significant rise. According to the Vietnam’s General Statistics Office, the number of international arrivals last year grew nearly 14% year-on-year to nearly 6.9 million with Japanese visitors accounting for more than 576,300, up almost 20% compared to the year before.

“We assume the passenger flow between Vietnam and Japan will increase continuously,” said the ANA boss in Vietnam. The two countries will be celebrating the 40th anniversary of their diplomatic ties in 2013.

In launching new destinations, ANA is spending big on new aircraft to better cater for passengers on its domestic and international flights. In September, ANA ordered 11 new Boeing 787-9 aircraft and will take delivery of these between 2018 and 2021.

ANA marked its name in the world’s airline history as the launch customer for the Boeing 787 when it used the newest and most advanced passenger airliner for its flights between Haneda and Okayama/Hiroshima in November 2011. With those new orders, ANA will operate a total fleet of 66 Dreamliners, which offer greater seating capacity and support ANA’s cost-effective, profitable expansion of international and domestic routes.

In the “Flying into tomorrow” clip, ANA emphasizes a key message of continuously providing a safe and comfort journey in the sky, an endeavor the airline has made since its foundation in 1952.

Such efforts have borne fruit for ANA. Earlier this year ANA brought home the 2013 ‘Airline of the Year’ by Air Transport World. A panel of judges composed of editors at this leading monthly magazine covering the global airline industry picked ANA for its exceptional financial performance, fiscal management, safety record, proven leadership in community, eco and technology endeavors, consistently high standards of customer service. This is the latest addition to the huge collection of accolades that ANA has won.