March 06, 2013 | 16:52
Tweet Email Print
A wider door will open for many Vietnam-based firms to benefit from new special customs priorities. 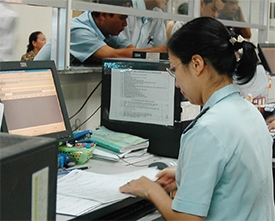 This would be known as Authorised Economic Operator (AEO). It will replace the Ministry of Finance’s Circular 105/2011/BTC issued in July, 2011 on amending Circular 63/2011/TT-BTC issued in May, 2011 on piloting customs state management priorities for conditioned enterprises.

One of the draft circular’s biggest highlights is that enterprises with import and export activities will be given priority if they have an annual minimum export-import turnover of $200 million, instead of $350 million as stipulated in Circular 105.

Meanwhile, exporters will be classified depending on their business types. For example, aquatic product exporters must have an annual minimum export turnover of $20 million. The figure will be $40 million for textile, garment and footwear exporters.

At present, the figure is $70 million for all exporters. “The requirement that exporters can be listed as prioritised enterprises when they must have at least $70 million in export turnover has made it hard for more enterprises to enjoy customs priorities,” Thuy said.

Under the new draft circular, prioritised enterprises would be exempted from having their customs dossiers examined during the customs clearance process. At present, it often takes some 14 hours to get customs clearance for a package. However, under the AEO, the time may be reduced to just about 15 minutes.

However, Thuy said enterprises wanted to be qualified for the priorities status must also meet some other strict conditions.

“Notably, private information about enterprises’ leaders’ responsibilities, knowledge about their business, accounting and auditing will also be appraised when their enterprises are considered for AEO,” Thuy said.

According to Vietnam Customs, after Vietnam inked mutual recognition agreements with foreign countries, Vietnam-based AEO firms would also benefit from customs priorities in such countries.