October 16, 2012 | 10:08 (0) user say
Tweet Email Print
The auto industry is pressing down the accelerator to speed up sales for the remainder of the year. 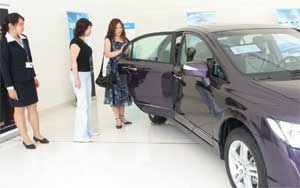 It follows news of retail sales volumes of Vietnam Automobile Manufacturers Association (VAMA) members and imported-CBU volumes of non-VAMA members in September hitting 7,669 units, up 9 per cent versus August.

Of which, car sales were up 15 per cent versus the previous month and truck sales up by 20 per cent.

Despite the positive trend in September, some auto-makers are still reluctant to say Vietnam’s auto industry is on the road to recovery. Mercedes Benz Vietnam’s general manager Michael Behrens said the industry was still under pressure due to economic difficulties.

Pham Anh Tuan, deputy director of the Ministry of Industry and Trade’s Heavy Industry Department, said total auto sales within 2012’s first months had plunged 33 per cent year-on-year, while other countries’ auto sales recorded impressive increases such as Thailand with 208 per cent growth.

Tuan pointed to auto policy inconsistencies as the main reason for fragile performances.

The sales of domestically-produced vehicles in 2008 were affected by an increase in vehicle ownership tax that year, BMI said. After the tax doubled to 10 per cent, the VAMA reported that average sales for the last four months of that year dropped by around half compared with the first eight months of 2008.

The registration tax was raised again in January, 2009 to 12 per cent in Hanoi and 15 per cent in Ho Chi Minh City. Furthermore, the special consumption tax was increased on April 1, bringing a return to the days of prohibitively high vehicle prices in the country.

“A further deterrent to sales was the country’s ever-changing tariff regime,” said BMI, adding that 2012 proved a difficult year for new vehicle sales in Vietnam because it depended on the government’s attitude and whether it decided to continue with the collection of the new road maintenance fee, personal vehicle user fees and charges for cars entering cities’ downtown areas in rush hour.

“For 2012, BMI now believes that a 15 per cent fall in output is the most likely outcome, reflecting the increased uncertainty surrounding the Vietnamese auto sector at the present time,” said BMI.