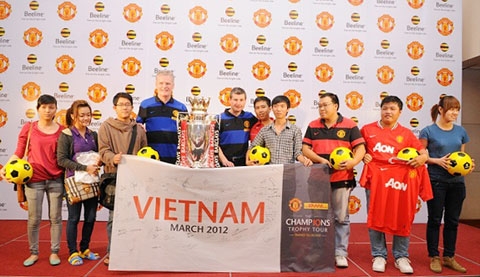 As part of the DHL Champions Trophy Tour, these two players arrived in Ho Chi Minh City and joined a fan-meeting event “Beeline with the Trophy” hosted by Beeline on March 27, 2012, from 13:00 to 14:00 at Sofitel Hotel with the attendance lucky Vietnamese fans who are Beeline subscribers.

During this event, Vietnamese fans enjoyed an interesting and once in a life-time opportunity to take pictures with the trophy as well as engaging in conversations, signature signing activities with the club legends.

The DHL Champions Trophy Tour is going to 27 destinations around the world this year including Vietnam. The trophy will travel almost 48,000 miles, visiting some of the club’s 333 million global fans.

Michael Cluzel, head of VimpelCom Indochina and CEO of GTEL-Mobile said: “As our commitment in bringing the legendary football club Manchester United closer to Vietnamese fans following our partnership with Manchester United, it is our pleasure to welcome Denis and Gordon to Vietnam, where football is consider as a king sport.”

“Beeline is an important partner of Manchester United and we are delighted to be sharing our on-field success with them at the event in Vietnam this week.  Manchester United has over 190 million fans in Asia, with 16 million in Vietnam alone, and our partnership with Beeline allows us to bring the Club closer to these fans,” said Manchester United’s commercial director Richard Arnold.