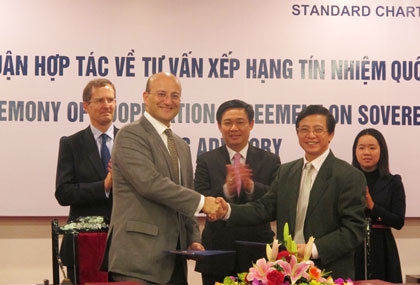 Vietnam’s sovereign credit rating is an important indicator for international investors and a tool used to determine the country’s borrowing cost in the international capital markets. Through improved economic management, the government is seeking to improve its rating to attract greater foreign investment into the country.  In addition, Vietnamese corporations and banks are increasingly accessing the international markets to finance their expansion plans.  For these borrowers, the sovereign rating is of critical importance as it sets a benchmark for their own ratings, impacting their financing cost in overseas markets.

Standard Chartered Bank was selected by the MoF because of its capabilities in advising on credit ratings, as well as its strategic focus and long-term commitment to Vietnam’s development.  The bank’s significant onshore presence enables it to provide experienced local insights to the rating agencies and to the broader investor community on behalf of the Vietnamese government.

Taylor said: “This agreement represents another landmark cooperation between the Vietnamese government and Standard Chartered Bank, in which we will assist the government in its strategic initiative to engage actively the rating agencies and, through them, the broader investor community.  We hope that this partnership will boost Vietnam’s sustainable development prospects.  We see it as another example in Vietnam of Standard Chartered fulfilling our brand promise, to be Here for good.”

Standard Chartered is a leading international banking group. It has operated for over 150 years in some of the world's most dynamic markets and earns more than 90 per cent of its profits in Asia, Africa and the Middle East.

Standard Chartered Vietnam now has three branches and employs nearly 700 staff. The bank provides a full suite of wholesale banking products and services to corporate and financial institutions. It also has consumer banking to serve individuals and small and medium enterprises.