July 27, 2015 | 14:59 (0) user say
Tweet Email Print
English Premier League squad Manchester City will play a friendly match with the Vietnamese national team at 8:00 pm on Monday in Hanoi, and the game will be broadcast live on the national broadcaster’s VTV6 channel. 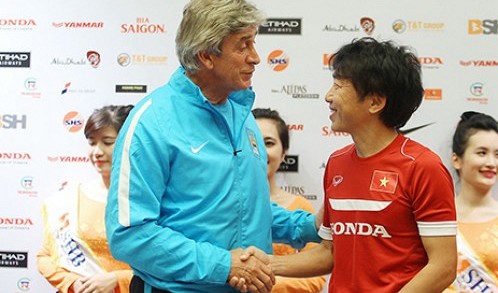 Many famous players of the club arrived in Vietnam on Saturday and had a training session at My Dinh National Stadium in the capital on Sunday.

Around 3,000 fans came to watch them train on the pitch. The fans were presented with many small balls kicked into the stands by The Citizens at the end of their training session.

The players also gave signatures and posed for pictures with the Vietnamese fans.

With the match to take place tonight, ticket prices have fallen by a half on the black market.

Tickets priced VND1 million (US$46) were advertised for just VND500,000 by vendors around the stadium.

Yesterday was a happy day for children living at the SOS Children’s Village in Hanoi because they were visited by Manchester City players.

They had the chance to play with the well-known players and draw paintings to give to them as souvenirs.

The players were also given greetings cards with messages such as ‘Never Give Up’ and ‘Nothing Is Impossible’ written by the underprivileged kids of the village.