May 19, 2011 | 08:27
Tweet Email Print
Veteran forward Filippo Inzaghi on Wednesday signed a new one-year contract with AC Milan tying him to the club until the end of next season when he will be 38. 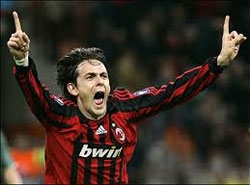 But midfield playmaker Andrea Pirlo revealed that he would be leaving the champions Milan after 10 years.

"I'm here to say goodbye," Pirlo told reporters when he arrived at the club's headquarters in Milan.

"After 10 unforgettable years I want to thank the club and the fans for their affection."

He said the decision to part company was mutual but that he had yet to decide on his next destination.

"I haven't yet spoken to Juventus and we (with Milan) didn't speak of any offers," he added. "It was already in my mind to leave, it was a mutual decision."

Pirlo, who turns 32 on Thursday, joined the club in 2001 after three years at cross-town rivals Inter Milan.

He started his career at Brescia and moved to Inter in 1998 but was only a bit-part player and had loan spells at Reggina and back at Brescia.

He won two Champions League crowns and two Serie A titles with Milan and the World Cup with Italy in 2006.

Inzaghi missed most of this season due to a cruciate knee ligament injury.

"Fortunately my career will finish at Milan, that's the best thing after all that has happened these last years," he said.

"At my age the thing that counts more is the affection and esteem from the directors and the stadium (fans)."

The 37-year-old also joined in 2001 from Juventus having also played for Parma, Atalanta, Verona and Leffe since beginning his career at Piacenza.

He was also part of Italy's 2006 World Cup winning squad and has won the same trophies as Pirlo at Milan while he also lifted the Serie A title once with Juve.