Government OKs anti-dumping suit against US

September 17, 2011 | 09:42
Tweet Email Print
The government has given the green light to the Vietnam Association of Seafood Exporters and Producers to initiate a dispute settlement case against the US at the World Trade Organization for unfair anti-dumping taxation on Vietnamese shrimp since 2003. 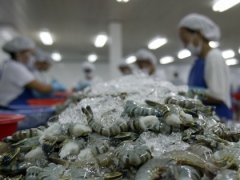 A recent VASEP conference pointed out that if Vietnam failed to pursue the lawsuit, it could lose the US market to other big exporters like India and Thailand who had won a similar suit, Thanh Nien newspaper said.

Following its partial victory in the anti-dumping case against the US in early July, VASEP sought the government’s approval for a second lawsuit to completely get rid of US anti-dumping duties on Vietnamese frozen shrimp.

Vietnam argued that the US’s zeroing method resulted in large anti-dumping tariffs of 4.13 per cent to 25.76 per cent on its products.

Since the WTO verdict was yet to completely free Vietnamese shrimp from US anti-dumping tariffs, the second lawsuit was necessary, a VASEP official said.

It would also enable Vietnamese shrimp exporters to get a $20-million tax refund and save them $900,000 every year for the administrative reviews the US makes.

VASEP reported that the shrimp export target this year was $2.1 billion. Last year it topped $2 billion with the US being the second largest buyer after Japan.

Zeroing is a method use to calculate dumping margins allowing all the provisions of negative results to be rounded to zero.

Zeroing has been widely condemned by other countries in the 154-member WTO since US officials do not take into account cases where the imported goods are cheaper in their home markets but apply an across-the-board duty rate based only on those that are more expensive at home.

The EU, China, India, Japan, and Mexico declared an interest in Vietnam's case at the WTO in February 2010, and China launched its own case over shrimp last February.

Argentina, Brazil, Canada, Ecuador, the EU, Japan, Mexico, South Korea, and Thailand have won zeroing cases at the WTO, and in January this year the US promised its trading partners that it would change the method. In the interim, it has reduced its use of zeroing.

Major milestones in Vietnam’s shrimp lawsuit against the US:

February 1, 2010: Vietnam requests for consultations with the US

March 23, 2010: Vietnam and the US hold consultations in Geneva

April 20, 2010: Vietnam requests the establishment of a panel