August 21, 2018 | 14:00
Tweet Email Print
At the “ASEAN 4.0: Entrepreneurship in the Fourth Industrial Revolution” conference held this morning by the Ministry of Foreign Affairs in Hanoi, experts said that Vietnam currently has a lot of advantages to seize opportunities from the on-going Industry 4.0.

It is because 55 per cent of Vietnam’s 93 million people use the internet. Vietnam has a large young population who can rapidly adapt to new technologies.

Besides, the country’s smartphone app usage increases by 21 per cent annually. The rate of smartphone users in Vietnam is very high, at 85 per cent of the population in urban areas and 68 per cent in rural areas.

Vietnam is also striving to become one of the world’s 10 largest nations producing software and providing digital content, with about one million people working in the IT sector.

“Vietnam is also making great efforts to achieve more sustainable growth based on improved growth quality and capitalising on Industry 4.0 to increase labour productivity and competitiveness and then rise in the global value chains,” said Bui Thanh Son, Deputy Minister of Foreign Affairs.

“Vietnam is determined to build a facilitating government by improving the country’s business and investment climate in favour of people and enterprises, especially the younger generations, improving the quality of education, and promoting the startup spirit, creativity, and dynamism of the whole nation,” Son said.

According to Tran Dinh Thien, former head of the Vietnam Economics Research Institute, as a member of the ASEAN, Vietnam must join hands with other ASEAN nations to boost the application of high-technologies in all sectors, based on its great potential in internet usage, smartphones, and young people.

“Industry 4.0 is rapidly changing the region and Vietnam itself. If Vietnam fails to have proper solutions to meet Industry 4.0 requirements, it will fall behind other nations,” Thien said.

The ASEAN is the sixth biggest economy in the world, with a population of about 630 million, 260 million of who frequently access the internet.

The internet-based economy in Southeast Asia is expected to have a total value of $200 billion by 2025, or 6 per cent of the region’s GDP. This is a big market for innovation and the quick development of new business models in the region and Vietnam.

The Fourth Industrial Revolution refers to a set of highly disruptive technologies, such as artificial intelligence (AI), robotics, blockchain, and 3D printing, that are transforming social, economic, and political systems and putting pressure on leaders and policy-makers to respond.

The “ASEAN 4.0: Entrepreneurship in the Fourth Industrial Revolution” conference is part of many activities organised ahead of the World Economic Forum on ASEAN in Hanoi (WEF ASEAN 2018) which will be organised on September 11-13.

Thousands of experts, CEOs, and journalists, as well as all regional heads of state or government will participate in WEF ASEAN 2018. The meeting will take place under the theme “ASEAN 4.0: Entrepreneurship and the Fourth Industrial Revolution.” 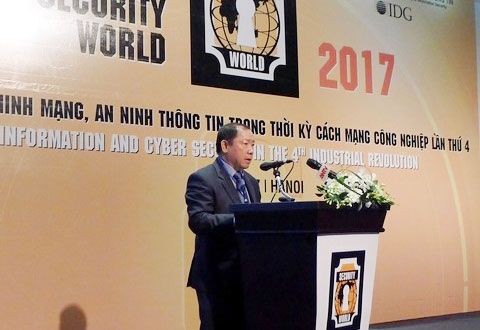