Banks continue to be in a pickle 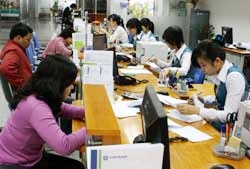 In the face of surging bad debts and blocked credit, banks have had to scale down lending rates to fuel demands.

Parallel to offering competitive rates to new loans, banks have softened the rates of old loans to 15 per cent per year maximum as regulated by the State Bank. In doing so, banks have sacrificed part of their profits to woo customers.

Their dividend payment was then inevitably affected.

“OCB credit expansion was just a half of the bank’s allocated credit growth target of 15 per cent for this year in ending October. Rising bad debts made OCB to put more money into provision which has eaten up bank’s profits,” said Tuan.

Tuan added the bank’s proposed dividend payment  of 10 per cent would be slashed to 5 per cent in this context.

Accordingly, its pretax profit was pulled down to VND530 billion ($25.2 million) from a proposed VND650 billion ($30.9 million) tantamount to 14.5 per cent, whereas the bad debt rate was revised from less than 2 per cent as proposed in early 2012 to 3 per cent.

Consequently, its dividend rate was revised from more than 12 to 10 per cent in 2012 in the face of falling profits.