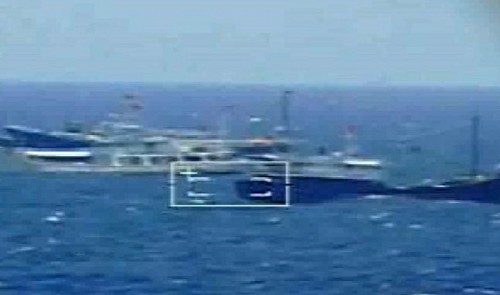 With water displacement of 17,000 tons, the two amphibious transport ships, #998 and #999, are equipped with eight surface-to-air missile launchers, a 76mm cannon, and four 30mm cannons, according to Vietnam Coast Guard Command.

Though the number of Chinese ships deployed to protect the oil rig, which was illegally planted in Vietnam’s waters since early this month, remained unchanged, the number of Chinese heavy-duty fishing vessels with water displacement of up to 100-150 tons, has increased to 40 units from 15 units, said Vietnam Coast Guard Command.

The forces deployed to protect the oil rig continued to follow the formation set on Tuesday, ready to prevent and even ram into Vietnamese ships trying to approach the oil rig.

Many Chinese vessels have besieged, purposefully crashed into, and fired high-power water cannons at Vietnamese ships since May 1 when China illegitimately placed the drilling rig in Vietnam’s waters.

On Tuesday, a Chinese missile frigate was dispatched to prevent Vietnamese ships from coming closer to the oil rig , said Nguyen Ngoc Oai, head of the Vietnam Fisheries Surveillance Force, told local media at a press conference held in Hanoi.

A Tuoi Tre (Youth) newspaper correspondent at the scene reported that Chinese missile frigate #571 on Tuesday moved for the first time from a site close to the drilling rig to approach and threaten Vietnam Coast Guard ships, tasked with requesting the Chinese side to leave the waters, some nautical miles away.

By the end of Tuesday, China deployed up to 86 vessels, including two military ships, with support from aircrafts and helicopters around its drilling rig Haiyang 981, according to Vietnam Coast Guard.

Nine out of the 86 ships were used to guard and protect the oil rig that has been illegally planted in Vietnam's waters in the East Vietnam Sea since May 1.

A handout photo taken by the Vietnam Coast Guard on Tuesday showed several Chinese vessels formed a line to prevent Vietnamese ships from approaching the HD 981.

The rig is located at 15°29’58’’ North latitude and 111°12’06’’ East longitude in the East Vietnam Sea, within the Southeast Asian country’s exclusive economic zone and continental shelf, as the drilling platform lies about 119 nautical miles (221 km) from Ly Son Island off the central Vietnamese province of Quang Ngai and 18 nautical miles south of Tri Ton Island of its Hoang Sa (Paracel) archipelago.