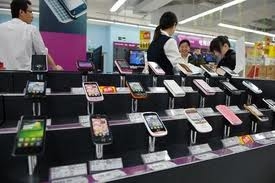 A recent report of International Data Corporation, a global market research firm, shows that strong rebound was seen in Vietnam’s smart phone market in the second half of 2012 against a slide in the year’s first half.

“Vietnam’s smart phone market has been developing phenomenally as product prices fall sharply. If current growth pace hold on, smart phones could account for about a half of total cell phoned sold in the Vietnamese market in 2013,” said Nokia Vietnam representative office managing director William Hamilton-Whyte.

Meanwhile, Qualcomm statistics show that smart phones sold in the Vietnamese market in 2012 accounted for 21 per cent of sold cell phones against 16 per cent in 2011.

In this context Nokia, as a top player in the country’s cell phone market, has scaled up efforts to earn a bigger market slice. This is mirrored through the company’s recent launching of Lumina smart phone lines in Vietnam running on compelling Windows Phone 8 management system.

Industry insiders however assumed it would not be easy for Nokia to expand market share in smart phone segment in Vietnam.

Units of smart phones shipped to Vietnam rose by 83 per cent year-over-year. This growth was made all the more significant as total mobile phone shipments declined by 9 per cent year-on-year.

"Local vendors such as MobiiStar, Q-Mobile and Gionee have demonstrated a desire to cash in on the burgeoning demand for smart phones," said ASEAN research manager for Client Devices at IDC Asia/Pacific Daniel Pang.

"With the market also seeing increasing volumes of low-cost smart phones from the likes of Samsung and LG, and more local applications being developed, the market is expected to continue to surge. It should also be noted that smart phone shipments in Vietnam are now double that of PC shipments.”