January 16, 2012 | 08:42
Tweet Email Print
The fizz has gone out of food and drinks giant San Miguel Group’s water and juice operations in Vietnam and it is throwing in the towel. 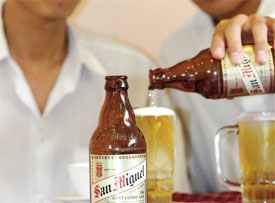 San Miguel Vietnam started up in 2003 with total registered investment capital of nearly $40 million to produce bottled water and fruit juices using locally sourced raw materials. The investment was part of the company’s five-year plan to capture a wider market in the Asia-Pacific region and to cash in on Vietnam’s long-term prospects.

But things didn’t go according to that plan. “San Miguel Vietnam has to carry out liquidation procedures for its plant here because of ineffective business in the recent years,” said Vo Thanh Lap, head of DIZA.

A source from the firm also confirmed the company was shutting up shop but refused to say more until the Philippine-based San Miguel Corporation made its statement.

Previously, San Miguel Corporation chairman Eduardo M. Cojuangco, was quoted by foreign media as saying: “We were among the first international companies to see Vietnam’s potential in the early 1990s. Now we seek to build a stronger relationship with our partners and consumers in Vietnam and are excited to have further opened up San Miguel to new horizons.”

It’s not all doom and gloom for San Miguel Corporation in Vietnam though. The company is optimistic about the beer and food sector and has increased total investment at its 20-million litre beer facility in Khanh Hoa from $40 million to $70 million.

San Miguel Corporation’s principal businesses are beverages, food and packaging. The company exports its products – primarily beer – to over 40 markets in various regions throughout the world. It operates over 100 facilities in China, Hong Kong, Indonesia and Australia among others.

Forgotten rights in use of sci-tech development fund