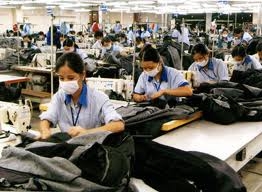 In the first six months of 2012, Vietnam reaped $400 million from exporting textile garment products to South Korea, currently the country’s fourth largest market for such products, a 27 per cent jump on-year.

This made South Korea the textile and garment sector’s fastest growing export market, whereas the sector’s exports to the EU hiked 22 per cent, the US up less than 10 per cent and the EU sank 2 per cent against the same period in 2011.

In 2011, Vietnam’s textile and garment exports to South Korea leaped 148 per cent climbing to $900 million.

In fact, apart from filling export orders for partners from big global markets, Korean firms based in Vietnam have shipped their products back to Korea.

Most of companies appeared on Vitas’ list of best export performers in the first five months of 2012 were Korea-invested. For instance, Hansae Vietnam posted more than $160 million, Hyosung Vietnam $100 million and Hansoll Vina (HSV) and Eins Vina $80 million each.

Of them, Hyosung Vietnam just came to Vietnam in 2007. At this time this wholly Korean-invested firm has opened three factories in Vietnam employing 3,500 labourers. The firm is part of global multi-field  Hyosung Group based in South Korea.

South Korea is one of Bac Giang Garment’s top export markets behind EU and the US, making up around 20 per cent of the company’s annual total export value.

“In the forthcoming time, South Korea will remain among top targets of local textile and garment exporters in their hunt for global outreach and Bac Giang Garment is not an exception,” said the company’s director Nguyen Huu Phai.

Industry experts assumed in the late six months Vietnam’s largest textile and garment export market the US would be unlikely to maintain its rapid growth 15-17 per cent as seen in the same period in 2011 whereas the EU as Vietnam’s second largest market for textile and clothing is in a fix.

In this context, Korea and China will be good options to help the textile and garment sector ramp up export to make up for the shortfall from EU and some other markets.