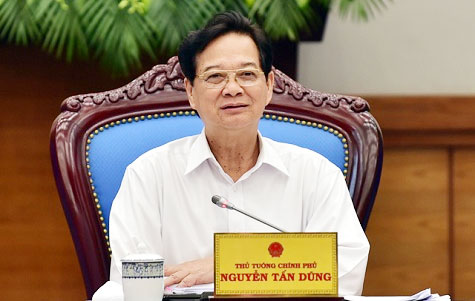 The request was made at the two-day Cabinet meeting beginning from September 30.

Economic restructuring must be closely combined with growth model innovation and improvement of the effectiveness and competitiveness of the economy, said PM Dung.

Inferior levels were asked to pay due attention to trade promotion activities in a bid to spur consumption of key farm produe like rice, coffee, rubber, shrimps.

PM Dung urged the Ministry of Labor, Invalids and Social Affairs to quickly introduce criteria for sustainable poverty reduction in the new context and submit them to the Government for consideration so that the criteria would be applied next year.

PM Dung stressed that it will be restructured towards reducing regular spending and increasing investment. More measures must be taken to ensure the national financial system.

Regarding socioeconomic performance over the past nine months, Minister of Planning and Investment Bui Quang Vinh said 13 out of 14 criteria were outperformed.

The economy expanded 6.5% in the reviewed period, the highest rate over the past five years, report shows.

International organizations and institutions have issued optimistic assessments of Viet Nam’s economy in their reports released in September, 2015.

The Asian Development Bank (ADB) gave out positive judgments on Viet Nam’s economy, raising its economic growth forecast to 6.5% in 2015 and 6.6% in 2016 recognizing the nation’s efforts in expanding production and attracting foreign investment.

The ADB evaluated that credit growth may exceed the Government’s criteria.

The UK’s Financial Times on September 22 stated that Viet Nam’s economy is recovering and integrating in to the regional value chain. Viet Nam is one of few nations showing the double digit growth in the export turnover.

The Japanese businesses highly valued the development potentials of Viet Nam, identifying Viet Nam as an attractive destination for investment in Southeast Asia.

Economists at Harvard University revealed that Viet Nam will be affected by China’s economic slowdown, proposing the nation diversify the economic sectors, take advantage of the Trans-Pacific Partnership Agreement, accelerate the reform of State-owned-enterprises and focus on promoting the private sector.