October 29, 2019 | 17:31 (0) user say
Tweet Email Print
Tightening credit for high-end real estate development coupled with a tight land fund in the centre of Hanoi could lead to a shortage of supply in the luxury segment in the next few years.

Specifically, there were only two new high-end projects with a total of 132 units, down 66 per cent on-quarter. Also, there were only about 18 new projects in the affordable segment, much fewer than in the previous quarters – the figures show the apparent hesitancy of large project investors when deciding to launch their products.

The reason for the shortage of real estate supply, especially in the luxury segment, is perceived by experts as the tightening of high-end real estate credit and land funds in the CBD area. In addition, the government's review of the land fund and tightening licensing of new projects in big cities like Hanoi also strongly influenced launches. This situation is expected to continue in the next few years.

This will significantly affect the market because the demand for quality apartments and high-class services is increasing as people's lives gradually improve, and there is an increase in the foreigner community in Vietnam. That is also the reason that information about luxury projects, despite being completed, has also attracted a lot of attention – as shown by King Palace, a rare luxury apartment complex located in the heart of Thanh Xuan district.

Located in a rare golden land plot on Nguyen Trai Street, King Palace has attracted a great deal of attention from domestic and foreign customers. The project also scored high in the eyes of Korean investors, which was most evident by the fact that in September it became a representative for Vietnam to attend South Korea's top real estate event – Realty Korea Expo 2019.

With extremely open views over the city, King Palace is currently one of the tallest buildings with 36 floors in Thanh Xuan district. All 410 units of the project boast a luxurious space, expressing the delicate taste of the owners. King Palace owns world-class utilities and sets new standards for luxury apartments, offering residents a life like the Kings of the new era.

King Palace’s show flat has convinced even the most fastidious customers with its modern, luxurious but still highly-aesthetic design. The project includes two-, three-, five-, and six-bedroom units with areas of 82-259 square metres, offering diverse choices for customers.

In particular, with the large window area and impressive height, the living space is in impressive harmony with nature and have the maximum amount of natural light. The ideal height will also keep apartments from the bustle of the city below, allowing owners to enjoy a perfect moment of relaxation every time they go home.

The project has been topped out at the end of July and is currently in the process of completion, ensuring the commitment to hand over the apartments to the owners in the second quarter of 2020. 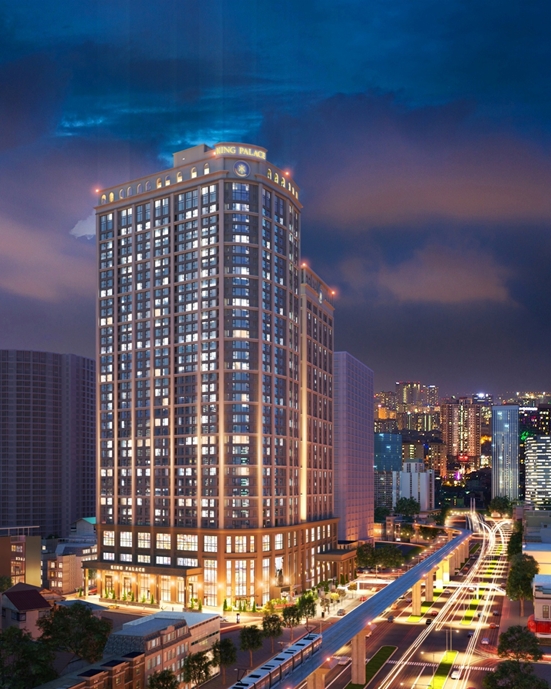