January 20, 2015 | 08:53 (0) user say
Tweet Email Print
Foreign enterprises are ramping up their investments in Vietnam’s textile and garment sector in preparation of the potential Trans-Pacific Partnership. 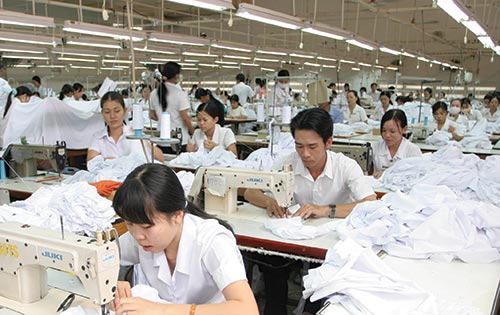 Two foreign-invested firms would add nearly $180 million in the total investment capital to their projects in Ho Chi Minh City.

Director of Worldon Vietnam Ma Jianrong said that his company would expand its production capacity with an increase of $160 million in the investment capital. In 2014, the company was granted an investment certificate to make high-class products for well-known brands like Uniqlo, Nike, Adidas and Puma. The company developed a garment facility covering 45 hectares in the second city’s Cu Chi Southeast Industrial Park, including a centre for fashion design and garment manufacturing.

“In light of a favourable investment environment and positive forecasts for production, the company decided to raise its investment capital from $140 million to $300 million,” said Jianrong.

Meanwhile, the Korean-based Nobland announced that it would invest an additional $18 million in its factory in the city’s Tan Thoi Hiep Industrial Zone, an increase of $61 million in the company’s current investment capital.

Nobland first entered Vietnam in 2002 with a $3-million garment plant equipped with 15 production lines. After 12 years, the company’s investment in the country has reached $43 million and they currently run three factories, with the annual total output of 74 million products.

According to Hepza’s statistics, dozens of foreign investors, mainly from South Korea, China, Hong Kong and Taiwan, have recently lodged applications to increase their investments in Vietnam’s apparel sector.

In this context, some big state-owned firms are accelerating their business operations before the country’s garment exports reap the benefit of zero per cent tariffs that are supposed to come into effect if the TPP is signed.

State-run Vinatex, for example, announced it would invest in more than 30 major projects to develop supply chain links among its subsidiaries during 2015-2017. Last week, the group announced it would build a fibre, weaving, dying and garment complex and upgrade its existing facility worth more than $714 million in the central province of Quang Nam this year.

Last year, according to the Ministry of Industry and Trade, Vietnam’s garment and textile export turnover hit nearly $20.76 billion, up nearly 15.8 per cent compared to 2013. The country planned to achieve a turnover target of $28-$28.5 billion this year, rising 15.9 per cent on-year. The country’s export turnover to the US market will be $11 billion, Europe with $4 billion, Japan with $2.9 billion, and South Korea with $2.8 billion.