November 06, 2012 | 09:31
Tweet Email Print
Doing business not only for profit, but also for making positive contributions to community development and building a better society is what South Korea-backed Everpia Vietnam has always cherished. 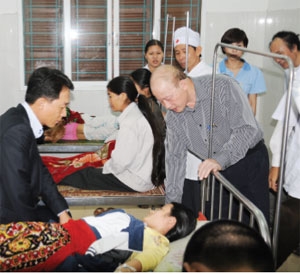 Although he has reached the age of 10, Tran Van Tu in Ly Nhan district’s Dao Ly commune in northern Ha Nam province, still looks like a five-year boy.  His appearance is a result of a heart condition from birth and the fact that his family is too poor to support drug expenses for him. His physical health is constantly weak.

The perilous disease has hampered Tu’s studies and caused heartache for his mother and grandmother, who have always been close to him.

Then a miracle came.  Tu was named in a Hanoi Television health programme Vitamins funded by Everpia Vietnam. The expectations of his mother and grandmother that  one day there was a remedy that could help Tu grow healthy have become a reality because of support from Korean firms, including Everpia Vietnam, who funded Tu’s trip to Korea for heart treatment. Korean doctors have succeeded in healing Tu’s heart defects and helped him realise the dream of going to school like other kids at his age.

Located in a poverty-stricken area, the health centre was similarly impoverished. Even after some upgrades, patients often had to share beds.

Patients surging in numbers that overwhelmed the basic facilities, a situation that could adversely affect treatment quality and has proven a chronic headache to the health centre’s management.

Van Thi Son, a nurse at the centre, said they have often changed the beddings for patients to ensure hygienic standards. Not only patient-beds were overused, so were the beddings.

Therefore, bedding sets for 100 patient-beds at the centre from Everpia Vietnam brought practical values as they bring warmth to patients to help them overcome the chill of the approaching winter.

“Contributing to community development through corporate social activities is bending on every person and every enterprise,” said Everpia Vietnam general director Lee Jae Eun. For its part, every year Everpia Vietnam deducts 2-3 per cent of its profits to fund social and charitable activities.  “Striving for a better society is what the company has always cherished,” Eun said.

Everpia Vietnam is the first Korean-backed business that made inroads into Vietnam, starting in 1993 with $15 million total investment capital. Since then, the company has been developing by leaps and bounds and was named among the leaders in bedding and padding business.

Its Everon brand has grown into top bedding brand in the Vietnamese market and has been circulated nationwide through an extensive network of over 600 exclusive agents.

In the past years the company has expedited a broad range of social activities to share difficulties of needy and underprivileged people as giving donations to lonely elderly, disabled people and orphans in area where the company operates.

In the last four years, Everpia Vietnam has founded a specific fund dedicated to philanthropic activities on a large scale which is fed with 2-3 per cent of the company’s profits each year.