Dong getting squeezed by many hands

November 28, 2011 | 12:24
Tweet Email Print
The Vietnamese currency is not likely to see a sharp devaluation by the year’s end despite seasonal dollar supply pressures. 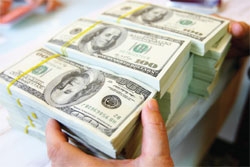 As a matter of cyclical business activities, dollar borrowers are expected to soak up large volumes of the greenback to repay due loans and clear import bills, leading to a temporary dollar supply shortage normally seen in a year’s last months.

USD credit growth year-to-date is 25 per cent, while the gap between total USD loans and deposits in the system is $7 billion. But, VietCapital Securities head of research Marc Djandji told VIR that a number of factors could help lower the risk of a large domestic currency devaluations into early next year.

“The most important one of those factors is administrative measures to support the domestic currency by the State Bank,” he said.

In early October, to shore up the dong, the State Bank raised its benchmark refinance rate from 14 per cent to 15 per cent.

Nguyen Kim Thanh, head of the central bank’s Banking Strategy Institute, predicted that the exchange rate would not exceed the 1 per cent upward adjustment limit that Governor Nguyen Van Binh announced in August.

“Obviously, the dong is often under more depreciation pressure by the year’s end, but given the government’s tight monetary policy and determination to keep the forex market stable, that pressure will be released and the trading band of 1 per cent will be maintained,” said Thanh.
In August, Binh stated that the reference interbank exchange rate, which is announced daily by the State Bank, would be adjusted by a maximum 1 per cent by the year’s end.

At that time, the exchange rate was around VND20,628 per US dollar. The current reference interbank exchange rate is VND20,803 per dollar. Thus, in effect, State Bank has used up 0.85 per cent of the 1 per cent limit for dong depreciation until the end of 2011.

Given the 1 per cent limit, the highest rate commercial banks can apply by the year’s end within the regulated trading band of 1 per cent is VND21,042 per dollar.

A report released by Standard Chartered Bank in October also suggested Vietnamese authorities might be able to keep the exchange rate relatively stable for the rest of 2011 at around VND21,000.

“Recent consumer price index inflation data which peaked in August at 23 per cent and was forecast to ease to 19.7 per cent in December, together with the hike in the refinance rate to 15 per cent from 14 per cent are supportive of the VND near-term,” the bank said in its report “Vietnam – Confronting the same old problems”.

ANZ was less optimistic. The bank had the same VND21,000 per dollar forecast for December, 2011 but the lender expected 3-4 per cent depreciation of the dong before the end of the first quarter of 2012, a drop which would see the exchange rate at around VND21,400 for next year.

“Although inflation peaked, there is a long way to go to dislodge elevated inflation expectations and corresponding precautionary demand for USD. In addition, the persistent trade deficit will continue to put pressures on the balance of payments,” said ANZ Asia-Pacific chief economist Paul Gruenwald.