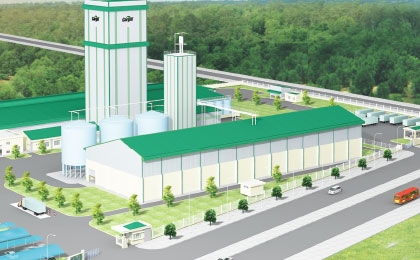 Cargill Vietnam has also been active in corporate social responsibility programmes in the past 17 years since its inception in the Vietnamese market. The company has financed the construction of 55 schools, provided over 1,000 scholarships, supported centres for disabled children and helped victims of natural disasters in Vietnam.

Founded in 1865, Cargill Incorporated is an international producer and marketer of food, agricultural, financial and industrial products and services with 158,000 employees in 66 countries. In nearly two centuries, with ardent desires for successes, Cargill has grown steadily, becoming a world’s leader in producing, trading and distributing farm produce and food and in risk management.

As part of its efforts to connect supply and demand globally and looking forward to potential agricultural and food markets, in October 1995, the US multinational established Cargill Vietnam Limited, three months after President Bill Clinton announced normalisation of relations with Vietnam.

Today Cargill Vietnam operates nine plants with a combined capacity of 750,000 tonnes per annum, putting the company in the list of top three animal feed producers in Vietnam. The plants, all are possessing a Hazard Analysis and Critical Control Point (HACCP) certificate, include seven established by Cargill in Dong Nai, Long An, Dong Thap, Binh Dinh, Can Tho, Hung Yen and Ha Nam provinces and two others acquired by the US-owned firm from Provimi Group (the premix plant in Dong Nai’s Bien Hoa city) and Higashimaru Vietnam Co. Ltd (the Tien Giang shrimp feed mill) in 2011.

Cargill Vietnam are building on various cutting-edge advantages, from developed agriculture and livestock industries in the localities its plants are located that enable fast delivery and transportation cost reduction, to a strong backup from the Minneapolis-based Cargill’s Nutrition Research Centre that allows the company to ceaselessly apply new technologies into production and introduce new products to the market. As the result, local breeders are ensured that they can always get the best feeds from Cargill to increase farming productivity while still being able to lower their input costs. 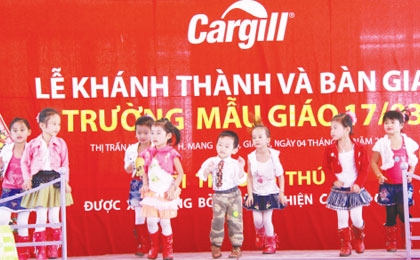 Cargill Vietnam is also active in various businesses outside its core animal feed production. Since 1996, the company has launched a grain and oil seed supply chain. With a fleet of vessels and international transportation services, Cargill is one of the five biggest suppliers of soybean cake, wheat and sugar in Vietnam.

Since 2004, Cargill has been working in Vietnam, along with the Vietnamese and Dutch governments and Mars Incorporated, to help Vietnam develop its cocoa sector and produce high quality sustainable cocoa beans to meet the growing demand for certified sustainable chocolate. As part of this development Cargill supported construction of seedling houses and built buying stations close to the cocoa growing areas, providing easier access to the market for farmers. The company has also introduced its successful farmer training programme to Vietnam, which to date has trained 12,000 farmers. Now it is responsible for 70 per cent of Vietnam’s cocoa export with three cocoa purchasing points in Dak Lak, Ben Tre and Binh Phuoc provinces.

Besides helping Vietnam to export cocoa to Holland, Cargill Vietnam also sells Vietnamese fish oil and fish fat to the Philippines and Japan, and mediates in exporting fillet tra catfish to the US-based Cargill Food Chain as part of Cargill’s continual efforts to support Vietnam’s seafood export to the American market.

Since 2008, Cargill Vietnam has supplied foodstuff ingredients, aromatic flavors, sweeteners substances and additives to milk, confectionery, beverage and food producers in the country.

Corporate responsibility is considered a process of continually improving Cargill’s standards, actions and processes. The company states its commitments on business conduct, the environment, people and communities guide its overall approach.

During its operation in Vietnam, Cargill has championed many charity activities. Annually, Cargill Vietnam organises “Cargill Care Raising Day” to call for all its staff, customers, dealers and partners to contribute to Cargill Cares Fund. The fund has raised more than VND50 billion ($2.4 million) and implemented many charity programmes, particularly building 55 schools for children in rural areas.

In 2007, Cargill Vietnam was honoured to welcome Mr. Truong Tan Sang, now Vietnam President, at the ribbon-cutting ceremony of its charity school in Long An province.

In 2009, Cargill Vietnam was awarded a Third-grade Labour Medal by the Vietnamese government. The company also received many other awards such as certificates of merit from chairmen of people’s committees in provinces and cities where Cargill Vietnam has business, high quality Vietnamese goods award, Golden Quality Award, Golden Rice, Golden Dragon, Golden FDI, Business for Community, Saigon Times Top 40, Agricultural Golden Cup, Title for Educational Cause and Tittle “Friend of Farmers”. Cargill Vietnam was one of the 10 FDI companies invited to the year-end meeting at President Palace in 2006.

Cargill Vietnam also got Award for Corporate excellence by the US Department of Sate in 2000 from Secretary of State Albright. In many years, the company is recognized as the best Business of Cargill Incorporated.

Chanh Truong, chief representative of Cargill in Vietnam and chairman of the Board of Members of Cargill Vietnam, said the company targeted to become the Partner of Choice by 2015, transferring the best ideas in the fields of agriculture, food and risk management, contributing to developing Vietnam’s agriculture. In the short term, Cargill is planning to invest in a cocoa liquor plant as a long-term investment commitment for developing cocoa trees, making farmers feel secure for their outputs.

The company is also studying to build more animal feed plants to double the current capacity to 1.5 million tonnes per year by 2015.

To reach the target, Cargill Vietnam continues to spend on its staffs, applying new technologies and techniques to turn out new innovative products. It will also expand its distribution networks to cover the whole country basing on three primary values of consistency, mutual respects and desires for successes.

On March 22, 2012, Cargill Vietnam will inaugurate its $18 million animal feed plant in Ha Nam province. The four-hectare plant is capable to produce 240,000 tonnes of product per year. On the same date, it will open the 55th schooling facility built by Cargill Vietnam with Cargill Incorporated CEO and chairman Greg Page to participate in the ribbon-cutting ceremony.

The VND1.5 billion (some $728,000) cost for building the kindergarten with five rooms and auxiliary in Duc Ly commune of Ha Nam’s Ly Nhan district has been financed by Cargill Cares Fund.