January 13, 2022 | 17:15
Tweet Email Print
Thanks to the flexible policies of the government on pandemic prevention and international integration, garment and textile exporters have been overcoming the woes of 2021 and achieved their yearly targets.

The textile and garment industry was one of very few to maintain its growth and accomplish its 2021 goals. Total export value was estimated at $39 billion, an increase of 11.2 per cent on-year, up 0.3 per cent compared to 2019, and much better than the outcome of 2020 of $35 billion.

At Garment 10 Corporation JSC, more than 12,000 workers in all 18 factories across seven cities and provinces have been inundated with work. “We have reached our revenue targets, 80 per cent of which comes from export markets, and the remainder comes from the domestic market. Employee income was 8.5 per cent higher than last year and 5 per cent higher than in 2019,” said Than Duc Viet, the company's general director.

According to the Vietnam Textile and Apparel Association (VITAS), in 2021 the export value of fabrics and fibres was reported to be the largest amount ever at $9 billion, and exporting rivals like Bangladesh and Myanmar have started to purchase Vietnam’s fabrics.

Over the last two years, Vietnam's trade deals with the EU and UK have also helped expand markets for exporters.

"My new partners in the UK have already ordered us to outsource for the whole of 2022,” Viet said, adding that Garment 10 has earned 10 contracts for exporting goods to the US, Europe, and Japan this year.

Explaining the strong growth of export value in 2021, Vu Duc Giang, chairman of VITAS, said that although weak links remain a concern for the industry, the agreements have boosted links among enterprises to improve the general strength of the industry.

"The cooperation among enterprises in textiles, dyeing, and garments meets the terms of trade agreements," Giang said. "They are sharing orders with each other and companies and factories in southern provinces have been supported by facilities in the rest of the country.”

Experts forecast that the total trade value around the world recover to more than $700 billion in 2022.

“We set a growth target for 2022 much higher than the targets of previous years. In the past, we set an average growth rate of 10-15 per cent but this year, it will be 20-25 per cent. We believe that what we have done over the past two years will give us more confidence in 2022,” said Viet from Garment 10.

Le Tien Truong, chairman of Vietnam National Textile and Garment Group said, “We are striving to grow by 10 per cent in total export value, mainly contributed by raw products. The export of fabrics and fibres will make up more than textiles and garments.”

Phan Minh Chinh, chairman of Pro-Sports, a garment exporter based in Nam Dinh province, hopes to be supported by the government in infrastructural development and land hire costs to lure more businesses from the textile and dyeing industry.

“We are waiting for proper policies from the government to welcome businesses that are willing to engage in sustainable development, which requires huge costs," Chinh explained. 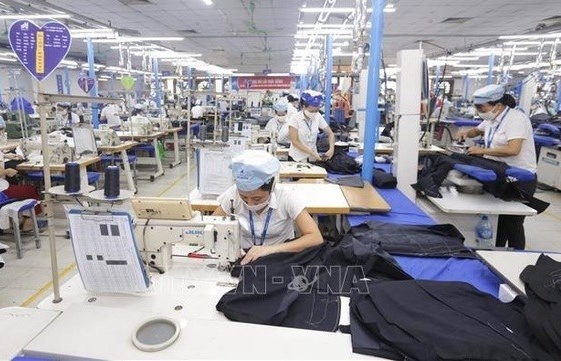