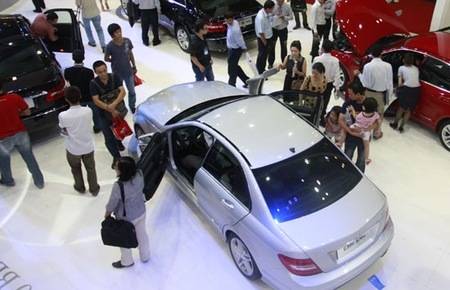 The ministries of Finance, Industry and Trade (MoF and MoIT) are considering removing a regulation requiring car importers to show evidence they were authorised dealers of genuine car manufacturers or traders in a bid to allow more car importers and dealers to join the market while boosting supplies of imported cars with a wider variety of brands.

The regulation is part of MoIT’s Circular 20/2011/TT-BCT dated May 12, 2011, effective from June 26, 2011 stipulating additional procedures for import of brand-new cars from nine seats and under.

In this context, the Vietnam Auto Manufacturers’ Association (VAMA) took steps forwarding a letter to the government and relevant agencies asking to maintain Circular 20.

According to VAMA, at this time only Peugeot brand was non-existent in Vietnam whereas other 23 global brands either have Vietnam-based manufacturing plants like Toyota, Ford, Mercedes, Honda and Mitsubishi or authorised distribution agents like Audi, BMW, Porscher, Volkswagen or Renault.

VAMA argued the forthcoming eighth Vietnam Motor Show this late September with proposed presence of many global car brands showcased a healthy market competition, an allegedly offspring of Circular 20/2011/TT-BCT where creating a bona-fide playground for locally based car manufacturer and authorised dealers.

Unauthorised car dealers are inferior to authorised dealers in guarantee and maintenance policies as well as professionalism degrees, according to VAMA. Besides, in case where recall orders were issued from the part of Vietnam Register and manufacturers the interests of customers purchasing cars from unauthorised dealers would not be protected.

Commenting on a proposal to remove a regulation requiring car importers to show an authorised paper from genuine car manufacturers or traders, a car business said under Circular 20 to import brand-new cars from nine seats and below importers must have authorised paper from genuine car manufacturers, traders and have maintenance workshops meeting regulations in Ministry of Transport’s Circular 43/2011/TT-BGTVT.

However, it is not easy to get certification to meet Circular 43 from the Vietnam Register. Circular 43’s Clause 6 requires importers’ application record to include car manufacturer’s authorised paper for guarantee and maintenance services or a certification of satisfying standards catered to guarantee and maintenance workshops by car manufacturers. This means these units must get approval from auto manufacturers to perform the service.

According to authorised car dealers to get approval from car manufacturers, these workshops must satisfy strict requirements for technical equipment parallel to Vietnam Register regulations.

Investment cost into genuine equipment would be not less than $800,000.

Based in these above arguments VAMA assumed supporting small car dealers through removing one of two requirements in Circular 20 would be just a halfway measure whereas abolishing Circular 20 after less than 20 months enforcement reflected policy inconsistency, thus driving up firms’ concerns.