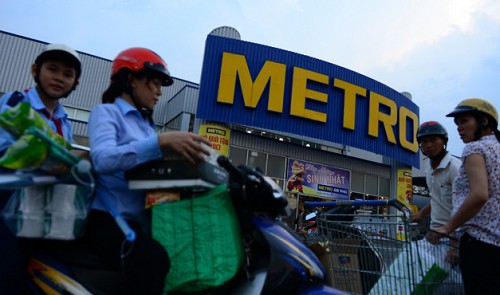 According to the Bangkok Post, ThaiBerli Jucker Plc has set aside around 1 billion baht ($31.26 million) to set up 205 B's Mart utility stores in Vietnam until 2018.

This is the next step in the company’s plans to expand its retail business in Vietnam after taking over the German-owned retailing chain, the newspaper reported.

Metinee Issarajinda, BJC's assistant vice-president for investor relations, told the Bangkok Post the opening of new stores will increase the total number of B's Mart in Vietnam to 300 by the end of 2018.

By that time, the operation of the B's Mart chain will break even, she added.

BJC introduced B's Mart stores into Vietnam earlier this year, and now has about 95 stores across the country.

Though suffering a 400-million-baht ($12.5 million) loss from the operation of Metro Cash & Carry Vietnam in the past, BJC's target is to change the business and become profitable within 3 years.

Metro Cash & Carry Vietnam, which generated US$692 million in sales in fiscal year 2013, has 19 outlets with 4,000 employees in 14 big cities across Vietnam. It has a 22% share of the country's modern grocery market, and a total net sales area of almost 110,000 square meters.

It is the biggest foreign-owned player in Vietnam's modern retail sector, according to the Bangkok Post.

Besides investments in Vietnam, BJC plans to spend 3 billion baht to expand its business in Thailand in the second half of this year.

The firm, with market capitalization of about 88 billion baht (about $2.8 billion), operates in five main areas, including packaging, healthcare, technology, retail and supply chain.

BJC joined the retailing business in Vietnam by investing in the Family Mart system after Japanese partners withdrew from the joint venture with a Vietnamese partner in mid-2013. Family Mart has since changed its name to B's Mart, and has about 95 stores nationwide.

In addition, Mr. Charoen Sirivadhanabhakdi holds stakes in many Vietnamese firms, including an importer in the southern region, Cellox paper firm, tofu-maker Ichiban, and the Hanoi Melia Hotel.

After the transaction, plus with bonus shares issued for the Thai firm on August 13, Fraser & Neave Dairy Investments Pte Ltd will own around 11.04 percent of Vinamilk, or around 110.4 million VNM shares. Previously, it owned a 9.54 percent stake in Vinamilk.

Reportedly, Mr. Charoen Sirivadhanabhakdi - chairman of Fraser & Neave Dairy Investments Pte Ltd and other companies, was born in 1944, and is a native of China’s Guangdong Province. In a ranking by Forbes in June, he was named the third-richest man in Thailand, with total assets of $11.3 billion.