Swing for the Kids prepares to tee-off 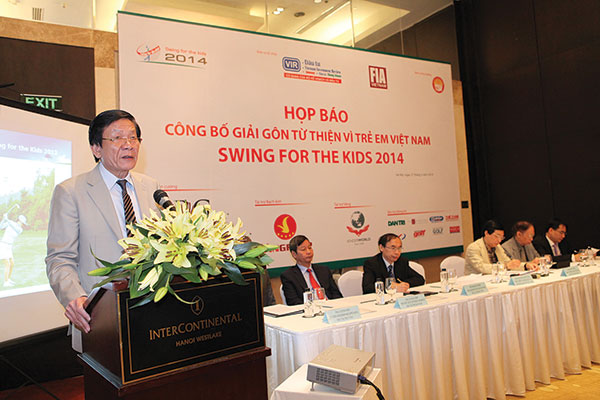 The tournament, which is co-organised by the Ministry of Planning and Investment’s Foreign Investment Agency, will begin at noon, with the participation of about 144 golfers from diplomatic corps, international organisations and enterprises. The award ceremony will take place in the evening of the same day.

Since it was launched in 2007, the organising board has directly granted more than 10,000 scholarships to poor but excellent pupils, while helping upgrade the training and education facilities in 38 cities and provinces nationwide. The total sum used for these activities has amounted to VND6.4 billion ($304,800).

“Though the value of the scholarships is not big, it shows VIR’s confidence in the pupils’ bright future. I do hope that the scholarships will encourage them to make greater efforts in their studies to become the next talented generation of the country,” said VIR’s editor-in-chief Nguyen Anh Tuan.

“It is VIR’s tradition to assist disadvantaged pupils and build a study-oriented society. We will continue to pull together bigger study promotion funds to help pupils, especially those in mountainous areas,” said Tuan, who is also head of the organising board.

Amongst the hundreds of pupils who have been helped by the scholarship fund is Dinh Van Hoc, who is now working for the Bank for Investment and Development of Vietnam. “I used to receive a Swing for the Kids scholarship for four years when I was studying at my university,” he said.

Hoc’s father passed away when he was 15, while his mother, who is a rice farmer, became older and weaker and so could not afford to pay for his education.

“Fortunately, I won VIR’s Swing for the Kids scholarship, which greatly helped me in my dream of continuing my studies and going to university. This was one of the greatest impetuses behind my flight to wider achievements,” Hoc said.

Thao Seo Phi, a first-year student from the Thai Nguyen Agriculture and Forestry University, has also received a Swing for the Kids scholarship for the 2013-2014 school year. His mother passed away two years ago, while his father, also a rice farmer, is struggling to keep the five-member family afloat.

“The scholarship is very useful to poor students like me. I feel very happy to receive it as it has encouraged me to study harder. I also would like to continue receiving more scholarships from VIR in the coming school years, like Hoc,” Phi said.

Swing for the Kids is also supported by other media agencies like VITV, Dan Tri, VnExpress, Vietnam Economic Times, Vietnam Sports, Education, and Golf and Life.

VIR scholarships exclusively come from funds donated by golfers, individuals, enterprises and organisations through Swing for the Kids under the umbrella of the Ministry of Planning and Investment and the Vietnam Study Promotion Fund.

Tuan has called for more donations and supports from local and foreign organisations, enterprises and individuals in the run up to the charitable golf tournament.

“Following the success of previous tournaments, VIR will continue to build bridges between the business community and poor pupils in Vietnam via its charitable golf tournament,” Tuan said.

By By Khoi Nguyen