November 21, 2019 | 10:11
Tweet Email Print
Vietnam highly values comprehensive partnership with the US, considering it one of the country’s top important partners, Prime Minister Nguyen Xuan Phuc told visiting US Secretary of Defence Mark Esper during a reception in Hanoi on November 20.

The PM spoke highly of the outcomes of the talks between Vietnamese Defence Minister Ngo Xuan Lich and the US official, as well as the practical and effective results of bilateral defence ties within the framework of the bilateral comprehensive partnership and agreements by the two countries’ leaders.

Vietnam will continue fully and effectively partnering with the US in the search for missing-in-action servicemen, he said.

Hailing defence cooperation as one of the foundations for the Vietnam – US relationship that contributes to maintaining peace and stability, ensuring navigation and aviation freedom in the East Sea, Esper affirmed that the US wants to further promote extensive collaboration and defence ties with Vietnam for the sake of peace and stability in the region.

He thanked Vietnam for assisting the US in searching for servicemen listed as missing in action during the war, and pledged to continue helping Vietnam in this work, as well as step up dioxin detoxification.

The guest expressed readiness to back Vietnam in the United Nations peacekeeping missions and expand joint work in other areas.

Lauding the significance of the year 2020 when Vietnam assumes the role of ASEAN Chair and the two countries celebrate the 25th anniversary of the normalisation of bilateral ties, he said the US hopes to actively help Vietnam fulfill its assigned tasks.

The US appreciates comprehensive partnership with Vietnam and strives to boost cooperation with the country, he said.

The Vietnamese PM proposed that both sides continue providing mutual consultation and support at multilateral forums, particularly at forums hosted by ASEAN, and support defence forums held by the Vietnamese Defence Ministry next year.

He also sought the US’s assistance in the United Nations peacekeeping missions, especially in ensuring the operations of Vietnam’s Level-2 field hospital in Sudan.

The PM affirmed Vietnam’s determination to develop balanced and sustainable trade with the US, believing that with determination and good will, the two nations will further lift their ties.

He expressed his wish to welcome the US President, Secretary of Defence and officials to important international events during the ASEAN Chair Year 2020.

The guest once again affirmed that the US supports Vietnam and ASEAN’s stance on the East Sea issue and will strive to make active contributions to ensuring peace, stability, navigation and aviation freedom in the East Sea.

He thanked Vietnam for its assistance in successfully holding the DPRK – US Summit in Hanoi in February, believing that the two countries will succeed when looking to the future. 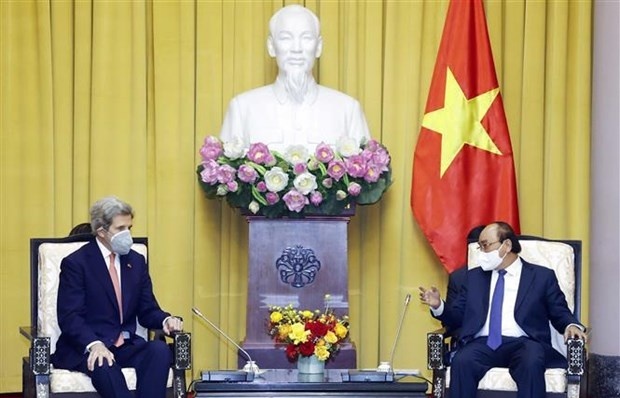