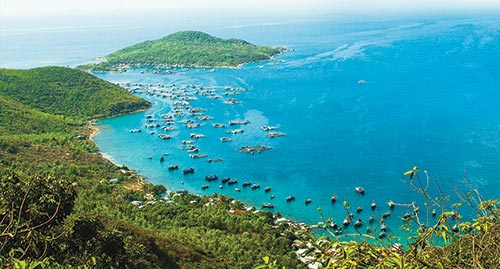 Cam Ranh and nearby Nha Trang continue to act as a magnet for high-class tourism Photo: Le Toan

Andrey Grinev, CEO and owner of Russia’s State Development, the developer of the Cam Ranh Flowers Resort in the central city, said that he had explored investment opportunities at beaches throughout the country before finally deciding to choose Nha Trang for his first project. With the total investment capital of $90 million, the Cam Ranh Flowers Resort is spread over 15 hectares and is comprised of a luxury hotel with 256 rooms and 10 bungalows, as well as prestigious residences for sale.

“We chose the Cam Ranh area, since it is one of the fastest growing and up-and-coming resort areas in Vietnam. It’s well suited for high-end tourism and coastal residences,” Grinev told VIR.

He added the Cam Ranh peninsula would include everything an up-and-coming resort destination would need.

“In the near future there will be constructed golf courses, shopping malls, sea port for yachts and boats, marina and much else,” he said.

Grinev also believed the area was set for development, a factor that would see residential prices rise.

“The area has a very favourable location and offers convenient logistics and transport connections via air, water and road as well as plenty of surrounding tourist attractions. The new international airport at Cam Ranh 15 minutes away includes direct and affordable flights to many cities in Russia and some in Asia. And new flight destinations are constantly opening. Nha Trang as a tourist resort town is just 20 minutes away – and it boasts developed and growing tourist and entertainment infrastructure,” he said.

Moreover he added the area benefited from an idyllic climate with calm, warm and clean ocean water.

According to property services provider Savills Vietnam, since 2007 the number of international visitors to Khanh Hoa and specifically Nha Trang, has risen by 18 per cent annually. More than 850,000 foreign tourists visited in 2014, in addition to 2.8 million domestic visitors.

However Russian tourist numbers slid last year as the rouble’s value fell. The occupancy rate dipped by to 70 per cent following a 6 per cent fall while the average room rate at four and five-star hotels dropped a huge 14 per cent to VND2.7 million ($126) per night.

By the end of last year Nha Trang had approximately 9,200 units in 43 projects. Around 3,200 rooms in six four and five-star hotels will enter the market in Nha Trang this year.

With the opening of two four-star and one five-star properties last year, there are over 4,000 rooms now available, a 24 per cent rise from 2013.

Apart from hospitality, Nha Trang is also home to residential development projects. Apartments accounted for 49 per cent of market share, followed by land plots at 41 per cent. Most apartment projects are located along the coast, with many on Tran Phu street. Landed property projects for second homes and investment are spreading to the west due to wider land availability. Buyers, mainly from Hanoi and Ho Chi Minh City looking to purchase a holiday home prefer projects by the beach with sea views

Nha Trang is set to see 34 future residential projects with the total area of more than 1,100 hectares in the pipeline, with the majority of the projects located to the north and west of the city.