The market was overrun by decliners as their headcount reached 315, against 53 advancers. Remarkably, 59 stocks hit floor prices and just five sat at the other end.

HOSE was slack on Thursday since investors traded just VND9.8 trillion worth of shares on the exchange (US$410 million).

No sector ended the session on the front foot as bearish sentiment was witnessed across the board. The securities sector was the main catalyst for the stumble with a sector-wide drop of 6.28 per cent.

Seafood was the next sector dragging down indices as it saw lots of red on the screen. Major decliners included Vinh Hoan Corp (VHC), Nam Viet Corp (ANV) and I.D.I International Development and Investment (IDI).

In the realty sector, the trio stocks of the Vin family - Vingroup (VIC), Vinhomes (VHM) and Vincom (VRE) - saw mixed results. While Vinhomes and Vincom fell slightly, Vingroup minted a gain of 0.17 per cent.

"Land slots in Ha Noi would be the most hard-hit section, should the liquidity in realty market fall," forecast an analyst.

Foreign investors withdrew money from the market by net-selling a total of around VND125.98 billion worth of shares on the two exchanges. Of which, they net sold VND133.6 billion on HoSE and net bought VND7.62 billion on HNX. 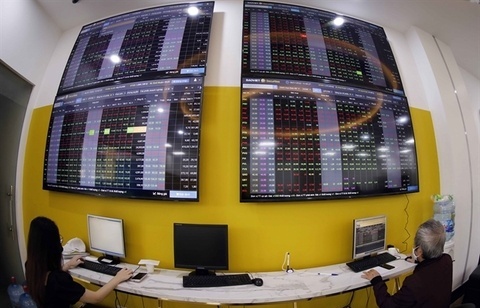