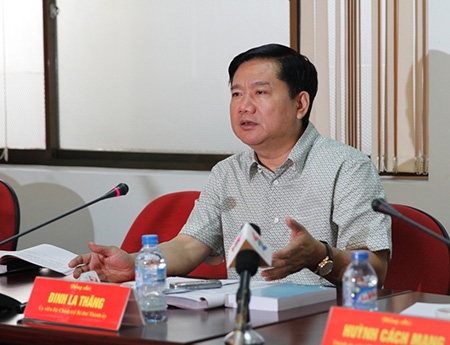 Thang was the former secretary of the Party Committee at Vietnam National Oil and Gas Group (PetroVietnam) and chairman of the board of members at PetroVietnam.

On April 27, the committee issued a press release on the conclusions of its meeting during April 24-26. Accordingly, Thang, together with a group of other former PetroVietnam officials, has to hold responsibility for various acts of mismanagement.

The committee highlighted four loss-making million-dollar projects by PetroVietnam ratified during 2009-2011, when Thang held the position of chairman, representing the state’s stake.

Besides having to take responsibility for making these investment decisions, Thang also has to answer for signing Resolution 233/NQ-DU of the Party Committee at PetroVietnam, the contents of which do not comply with the law. This resolution allows the board of members, the board of directors, and member companies to assign bid packages to contractors of their choosing, instead of carrying out legal bidding procedures.

Consequently, Thang has to take responsibility for the resolutions and decisions the board of members made to assign large bidding packages to specific contractors, oftentimes going against the government’s decrees.

He is also charged with the board of member’s issuance of Resolution No.4266/NQ-DKVN investing more than the allowed funds into OceanBank, violating the Law on Financial Institutions and causing damage to PetroVietnam.