Lotte Centre reaches for the sky 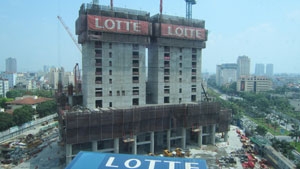 When completed, the Lotte tower will be the third highest in Vietnam behind the 70-storey Keangnam Hanoi Landmark Tower in Hanoi and Ho Chi Minh City’s Bitexco tower which has 68 storeys.

Lotte started construction on the $400 million  tower in October 2009 and when finished, it will house more than 42,200 square metres of department store space. Inside, there will also be 300 hotel rooms, while 63,500sqm is given over to office space. Serviced apartments are to take up about 40,000sqm and there is provision for 1,130 parking spaces.

Located at the corner of Lieu Giai and Dao Tan streets, the building’s unique architecture is inspired by Vietnam’s traditional dress, the Ao dai.

Lotte Coralis is one member of Lotte Group which entered the Vietnamese market in 1996 and has since expanded its cooperation into the food, retail, cinema and construction sectors. It has eight subsidiaries and is committed to continue accelerating its investment here.

The Lotte Tower project was originally set up as a joint venture between Luxembourg-based company Coralis SA and Lohr Industrie in 2005. However, in 2008 the project was transferred to Lotte at a cost of $55.7 million.

The Lotte Coralis management board recently together with key contractor Lotte E&C and sub-contractors set up a ceremony to pray for construction work safety at the site.
Equipped with advanced facilities for accident prevention, Lotte Centre Hanoi is 24/24 managed by a controlling centre which can cover all problems at soonest time.

Lotte was established in 1965 in South Korea. Its main activities include retail, food and beverages, chemicals and construction as well as hotels and resorts. The company is the fifth biggest conglomerate in Korea and has a more than 50 per cent retail market share in that country. In Vietnam, the group is operating Lotte Mart Phu Tho and Lotte Mart Phu My Hung in Ho Chi Minh City.