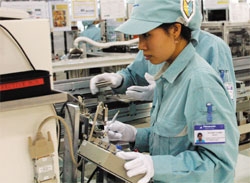 Today’s event, to be presided by the Ministry of Planning and Investment in central Danang city, is expected to lure over 300 representatives from central and local governments, relevant state agencies and over 150 local and foreign firms.

“This not only stems from Vietnam’s accelerating pace of industrialisation and further appeals for foreign investment but also emanates from the imperative need of Japanese firms to find lucrative investment venues, particularly those coming from the Kansai region,” said Van.

As planned, the forum’s key contents will be Vietnam–Kansai cooperation in propelling infrastructure development, and particularly in the East–West economic corridor. Also key will be expanding the Kansai region firms’ presence in manufacturing and supporting industries in the central region. This is about making the most of Vietnam’s linkage role to ASEAN countries via the East–West economic corridor.

“The forum is an excellent opportunity for Danang and the central region to exhibit their potential to the investor community and pave the way for the area to welcome a new wave of investment in the coming period,” said Danang city’s deputy chairman Phung Tan Viet.

To turn the city into a magnet to investors, alongside fairly stable and open investment policies, Danang management authorities have strictly followed the motto ‘infrastructure first, then investment projects’.

A sequence of key infrastructure projects is in the development pipeline. Most significant are the project to upgrade Danang international airport worth over VND2.5 trillion ($119 million) which will shortly be pressed into service and another on improving Tien Sa port worth over $100 million. Efforts are also being made to kick a 1,010-hectare industrial and hi-tech park into gear.

For instance, the 70ha Tam Hiep port and logistics complex is now under intensive construction costing $122 million and the government has ratified Chu Lai airport group’s development plan to 2015 which aims to put into place the central region’s largest goods transit airline hub.