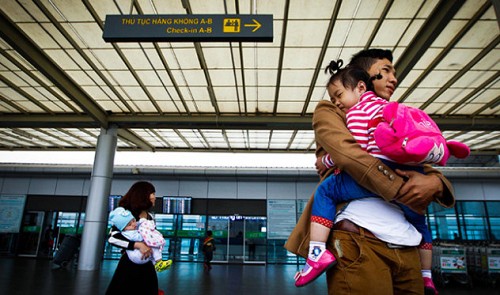 Noi Bai and Tan Son Nhat International Airport were ranked fifth and eighth in the “Top 10 Worst Airports in Asia 2014” list published by The Guide to Sleeping in Airports in October last year.

But the Hanoi terminal is not in this year’s list, whereas the southern one has failed to improve its ranking, according to survey results released last week by the Canada-based travel site.

Noi Bai left the “worst list” for the "club of the best," as it jumped from being the world’s fifth-worst airport to the 28th place in the “Top 30 Best Airports in Asia” list, whereas Tan Son Nhat fell four notches to be Asia’s fourth-worst airport in 2015.

The Ho Chi Minh City airport was also ranked eighth in the “Worst Airports in the World 2015” list, with its rating “deteriorating in recent years thanks to allegations of corruption.”

“Numerous survey respondents reported that customs officers [at Tan Son Nhat] ask for bribes in order to move through processes faster, and those that declined paying faced problems or delays with their paperwork,” the survey report says.

Other complaints include poor Wi-Fi signals, dirty bathrooms and a limited selection of restaurants.

“If visiting this airport, be sure to keep your valuables hidden and some small cash on hand – and consider filling up at the nearby Burger King before entering the terminal itself,” the report mocks.

The Guide to Sleeping in Airports annually conducts a survey asking travelers to rate their airport experiences based on the services and facilities available within the terminal, cleanliness, customer service, comfort and their overall airport experience.

Those that topped The Guide to Sleeping in Airports’ charts for the worst airports in the world collected the most negative feedback from voters over the past year.

“These airports fall flat in terms of providing any kind of enjoyable overall airport experience, and instead, they are dirty, uncomfortable, and unfriendly, and lack the most basic of services and amenities,” the website said.

The Noi Bai International Airport said its higher rank in the airport survey indicates that the opening of the new Terminal T2 and its bid to diversify and improve customer service have paid off.

“Nevertheless, where we stand in the airport survey is not as important as how passengers feel about our service,” airport deputy director Nguyen Thi Kim Ngan said.

Ngan added Noi Bai still has things to do as Terminal T2, officially open to passengers in December last year, is now handling only six million passengers a year, compared to a capacity of up to 15 million.

In the meantime, the pressure is now on management at Tan Son Nhat, the country’s busiest airport.

“Tan Son Nhat is overloaded and can only manage to ensure service quality at the minimum level,” director Dang Tuan Tu said at a meeting on Tuesday.

The meeting was held to find solutions for better serving passengers, in the wake of the poor survey result from The Guide to Sleeping in Airports.

The airport will try to fix the “poor Wi-Fi signals” and “dirty bathrooms” by the end of this year, Tu promised.

The Tan Son Nhat operator has also called on the transport ministry to allow it to combine the security check and customs counter in one place to “cut the time passengers have to spend on paperwork before boarding their flights,” according to the director.

The airport’s management will also set a target to escape from the worst airport list next year.