June 18, 2022 | 22:59
Tweet Email Print
Hanoi - Head coach of Vietnam's U23s Gong Oh-kyun has said that his goal isn't just to win trophies and accolades, but to build a team for the future based on true values and his style of football.

The South Korean coach spoke to the media after his team returned home from the 2022 AFC U23 Asian Cup in Uzbekistan.

Despite only working with the U23 team for a short time, the 47-year-old coach left his mark with impressive performances as he guided his side to the quarterfinals of the AFC event, where they fell to a strong Saudi side.

Gong said that he felt some pressure as the successor to coach Park Hang-seo, but wanted to promote a different style of play.

"I was under pressure, balancing Park's achievements with my plans. After the SEA Games 31, I was afraid that the players would not be able to keep up with my style of play and philosophy. I always want to try to build my team. Both Park and I have the goal of developing young players for the future," said Gong.

According to Gong, coach Park has a lot of influence on the South Korean coaches. After Park's successes with Vietnamese football, more and more coaches from South Korea chose Southeast Asia as an ideal destination for their career development.

However, Gong said that achievements and titles are not the biggest goals. Instead, he wants to build true values amongst the players.

Gong revealed that he wanted to give all of the squad the chance to play at the 2022 AFC U23 Asian Cup as it was a great opportunity to help the players gain experience and develop.

“I have worked with many South Korean youth teams as well as in Southeast Asia, so I know my job well. In my short time with the U23s, what I aim to do is promote the strengths of the players and connect the team. I found players suitable for the pressing philosophy and the outline of four defenders," Gong said.

Gong's biggest mark in leading the Vietnamese team is the indomitable spirit and relentless efforts of the players. He often takes emotional images of the players in each match, to encourage and cheer their spirits for the next.

"I want to build a good generation to maintain the success of Vietnamese football over the years. The opportunity to work with Vietnam's U23s will help me find new young players. In the future, Thailand, Malaysia or Indonesia will definitely want to pursue and close the gap with Vietnam," Gong said.

With Gong’s result, it is likely that his one-year contract, which expires in March next year, will be extended by the Vietnam Football Federation. 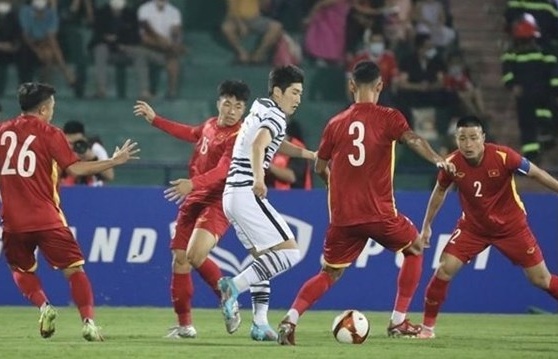